On July 31st, the project “Digital Relay Test Software Based on IEC61850”, held by PONOVO, passed the medium-term acceptance. During the demonstration section, the engineers used the self-developed PowerTest software to control the digital relay testers and realize the auto closed loop test on PSL603U digital linear relays. The result won highly praise of the team experts. 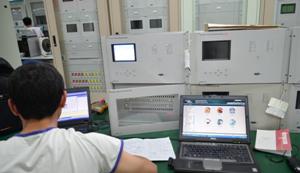 This project starts from November 2011 and comes to the end in this October. Based on the project, PONOVO will explore the first testing software based on IEC61850 in China.

It runs the testing modules in the testing software, which is the control center, to realize the complete testing process standardization management. The system supports importing SCD files to get SMV and GOOSE automatic configuration. The message configuration information is saved into the automatic testing templates. Users can transfer the configuration parameters during repeated testing to simplify IED configuration. Based on IEC61850 protocol and intelligent relay communications, the system reads the settings of relays, trip messages, evaluates testing result integrated with relay trip contact and trip messages. After testing, it forms the user-defined format test report automatically. The whole testing process is operated by on key without human source and its interference.