Parts of northern Mozambique are without electricity after torrential rains knocked down 10 pylons in the Mocuba district.

The damaged pylons are on the transmission lines carrying power from the Cahora Bassa dam to Upper Zambezia, and on to Nampula, Niassa and Cabo Delgado provinces.

Economic activity has ground to a halt in the country’s second largest city, Nampula, except for those enterprises which have their own generators. The power cut has affected anything which depends on the Internet – including the banks. Citizens found themselves unable to use Automatic Teller Machines (ATMs) to withdraw money from their accounts. 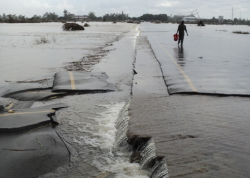 Citizens in Nampula have commented to independent television station STV that the electricity company Electricidade de Moçambique (EDM) had not explained the power cuts. It was not until Tuesday evening that EDM issued a brief press release explaining that the rains in Zambezia had caused the power cuts.

EDM said it had “mobilised immediately all the human and technical resources necessary”. EDM brigades were now on the ground “under adverse weather conditions, in order to restore the electricity supply as quickly as possible”.

But EDM spokesperson Luis Amado told STV that repairing the damage could take at least a week. The pylons were down on a 4.5 kilometer stretch of a 220kv transmission line, he said. Before the pylons can be replaced, the teams must first reach the area, and noting that by Tuesday afternoon it was still raining in Mocuba.

There are alternative sources of power for some parts of the northern provinces, but they cannot provide the same quantity of electricity as the lines from Cahora Bassa. Lichinga and Cuamba, the two main cities in Niassa, can draw power from two small local hydro-electric power stations, and diesel powered generators are also available in Lichinga and in the Cabo Delgado provincial capital, Pemba.

Amado said that EDM is working to ensure that a recently installed power station in the port of Nacala can supply that city with electricity, but there are unfortunately no alternative sources at all for Nampula city.

Heavy rains have also devastated neighbouring Malawi, where 48 have been killed approximately 70 000 have been left homeless. The rain is expected to continue for several days as these southern African states have been hit by late summer storms.