The method whereby household electricity usage is logged by visiting meter readers or when access does not occur, estimates of consumption are made, is archaic in the context of modern technology.

Many spheres of human endeavour and existence have been influenced by evolutions in information technology. However, in spite of this, the metering of electricity, particularly in the residential sector across much of South Africa and elsewhere, has remained in a time warp.

Enermatics CEO Dr Raj Naidoo is one of the founders of a smart metering technology company formed in 2004 with a goal of improving people’s lives by empowering them with ways to use energy more efficiently and effectively. He says that the uptake of smart electricity meters by residential consumers across South Africa already numbers in the thousands. These are the early adopters and represent the incipient upward slope of a bell curve trend that is anticipated to become mainstream within a few years.

His view is supported by Frost & Sullivan in its analysis of advanced metering infrastructure (AMI) trends. This analysis looks at a series of likely developments that will be adopted. It starts with remote meter reading having become viable on a utility scale from 2010 onwards, while 2013 sees the same achieved for remote meter configuration. It predicts that the next trend will be in-house display of electricity consumption, sometime between 2015 and 2016, time of use management systems to be adopted in 2018, and demand response technology to be common post 2020.

Naidoo says that from an Enermatics perspective all the necessary technology for inhouse display of electricity consumption was in existence three or four years ago, in South Africa. “Apart from the early adopters among customers, municipalities and Eskom in South Africa are also interested in smart metering, but the two groups have different imperatives in seeing value in the technology,” Naidoo says. He also believes that while customer driven smart metering technology may seem to be futuristic now and many people perceive it as something that might be nice to have, but of little consequence, once they become used to the benefits of the technology they will not want to go back.

From a municipal utility and electricity supplier perspective the technology would help deal with a problem associated with pre-payment metering, which is that of ghost vendors. It provides utilities more tools to reduce non-technical losses, improves fault detection, provides an effective means to deal with non-payment, and provides more control over loads. Any improvement of the visibility of the network is desirable for distributors. “While there is a definite economic payback for an investment by utilities in smart metering technology, this has to be seen from a holistic perspective. It is not just a buying decision for a bulk purchase order of meters.”

Graph showing cumulative monthly electricity usage, compared with that of the previous month.

From a customer’s perspective it will give greater control over their electricity usage. Pre-payment metering is only a step in that direction. Unfortunately, as it turns out, while customers perceive pre-paid technology to be cheaper, it is not, due to a regulated vending fee that actually makes their electricity price 6% higher. “There is no reason for this to be the case, and the technology should be cost competitive with the older technology it is replacing,” Naidoo says. It is argued that this fee is to cover vending management systems and infrastructure, though the replacement of meter readers and increased control over electricity losses, non-payment, etc., should more than compensate.

Naidoo believes that Enermatics, which designs and builds its products, both hardware and software, completely from scratch, is able to maintain a cost advantage over international suppliers. “We believe we are already competitive with existing technology, and the local manufacture provides us with a cost advantage. South African companies were the first globally to develop pre-payment metering and the country can still take a position of leadership in the field of smart metering.”

One of the inhibiting factors in the uptake of smart metering and smart grid technologies is the absence of a unified global standard. This may turn out to be an advantage for South Africa. “The US has its own sets of standards, as does the EU, and then there are user groups such as Zigbee trying to pursue their own ideas on standards. What I see happening is that South Africa will not totally align with either the US or EU standards, but will pursue its own course.” The reason he suggests is that these standards do not consider the priorities and issues an emerging market such as South Africa has to take cognisance of. 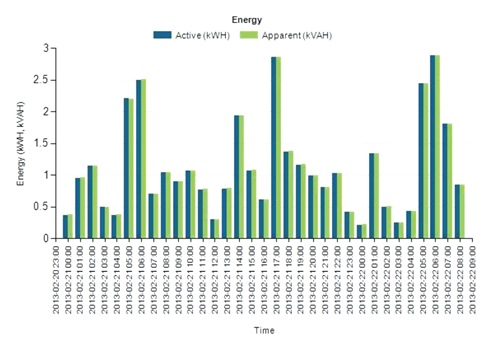 One of the reasons Enermatics is focusing on the residential consumer sector is that the municipal electricity distributors are cash strapped (with the well-known R50 billion maintenance backlog) and have capacity shortages, both of which hinder the adoption of smart metering technology.

On the other hand, some of the problems that beset distributors, such as inaccurate billing information, provide an incentive to customers who want greater control over their electricity usage. Smart metering by a group such as Enermatics provides customers with independent creditably verifiable information should a billing problem arise.

“With our smart metering system, users can get accurate information as to their electricity usage patterns in 30 minute increments tracing the whole month’s history. The standard unit comes with two inputs so residential customers can determine how much of their electricity usage does come from their water heating system, for example.” This enables them to make informed calculated decisions as to the benefits of installing technologies such as solar water heaters or heat pumps. In general the increased knowledge of how electricity is used in an individual’s home cannot be anything other than a boon to the rate payer.

Naidoo says that if desired, customers can measure as many discrete inputs as they wish, such as washing machines, pool pumps, etc. Even without going that far, he notes that customers have been able to trace reasons for higher than expected electricity usage, such as the discovery that space heaters were being kept on all day.

While the commercial sector market represented by shopping centres and buildings under management systems is certainly a market suited to smart metering, Naidoo says, “At this stage we play in the lower end space, the simpler to implement residential sector systems.” 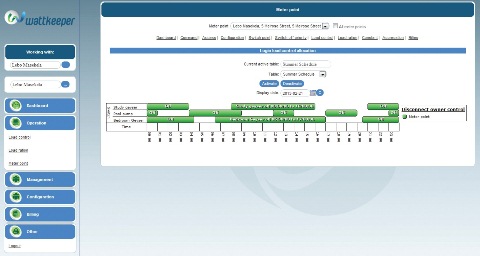 The Enermatics smart metering system consists of the meter itself, which Naidoo describes as a sensor, with the information system behind it being cloud based, and there being a GSM component. “Much of the system is invisible to the consumers, who can also have apps that provide updates remotely. It even enables customers to do things like switch off their geysers remotely. Those that do not have smart phones can get updates by SMS.”

The installation of the system is also very rapid, and can take place in one or two hours. In addition, the fault finding alerts enable problems to be detected and solved immediately, often without the customer even realising there was a problem.

Another trend where smart metering will work is for people wanting to go off-grid. It allows the control and measurement of the use of the electricity supplied by solar photovoltaic systems, and enables the adoption of net metering. Naidoo, who did his thesis on grid quality and has lectured on the topic at the University of Pretoria, does not see any significant technical inhibiting factors for net metering. Probably the biggest issue with distributed generation will be harmonics management, and it would entail the use of filters at strategic points.

He believes technical arguments against net metering for distributed generation lack significant plausibility, and says that standards are in place and the equipment conforms to these. The likelihood of customers supplying the grid at very low electricity usage times like the middle of the night to possibly push the distribution system above its legislated voltage range does not fit with the profile of solar PV systems. “The power would be supplied typically during periods when the distribution network is under pressure and it would be of benefit.” If a user theoretically wanted to push battery stored power onto the grid during an off-peak period, it could be an issue, but this is something easily managed in a smart grid, using some limiting measure.

“As soon as people see the bigger picture and the additional control and understanding smart metering technology can give them over their electricity usage, it will be adopted, and this will be driven by the private sector users of electricity,” Naidoo says. The technology already exists, and is already becoming cost competitive for customers to adopt – hence the market will soon be challenging utilities to remain apace.

“We are also definitely interested in other parts of the sub- Sahara Africa region outside South Africa, and have tendered in such markets. However, South Africa does have an advantage in that a greater level of electricity infrastructure is in place, whereas in other countries this is still being established.”

Facebook
Twitter
Linkedin
Previous articleThree big items on Eskom’s agenda for year ahead
Next article‘The biggest challenge facing the geothermal industry is the reluctance of many investors to finance exploration endeavours.’