19 June 2009 – Reports from the Central African Country of Gabon indicate that the Kongou Falls, described by some as the most beautiful waterfall in the country, may be harnessed to generate hydro power.

The falls have apparently been earmarked to generate power for the US$3.5 billion Bélinga iron ore mining project in north-eastern Gabon.  Work is scheduled to begin in 2009 and all the iron ore will be sent to China, who is also financing the whole project including the 560km road network needed and a deepwater port.  There is also talk of some 30 000 jobs being created by the project.

However, conservation groups fear the environmental impact of such a dam on the surrounding Invindo National Park and the forest environment.

An alternative location at the Tsengué-Lélédi falls, has been put forward to conservation groups, on the grounds of less environmental impact and great benefits to the local population.  However, the alternative site is farther away than Bélinga. which will add significantly to the cost of the project.  The minister of Mines, Richard Auguste Onouviet, has said the building at the alternative site could cost as much as US$1.5 billion, instead of US$754 billion at Bélinga. 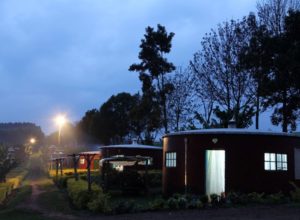