South Africa is experiencing serious energy shortages and therefore alternative energy generation methods are being adopted at all levels of the country’s economy. There are 284 municipalities and several supply utilities, all owning gravity water supply distribution systems which could be considered for small, mini, micro and pico scale hydropower installations. Various locations in these systems may be equipped with turbines (or pumps as turbines). The generated hydropower may be used on site, supplied to the national electricity grid or fed to an isolated electricity demand cluster. 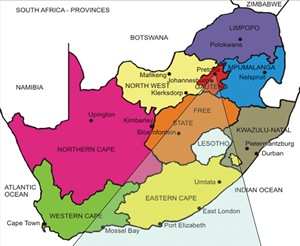 Location of the City of Tshwane in South Africa

A pilot plant has been constructed at the Pierre van Ryneveld Reservoir situated in the Country Lane Estate south of Pretoria. Tests are being conducted to verify the assumptions made during preliminary calculations. Although the site is not one of the municipality’s top 10 sites in terms of hydro potential, it was selected due to the construction of a new reservoir affording the opportunity to construct the first closed conduit hydropower pilot plant in South Africa. It is a ±15 kW installation utilising a cross flow turbine discharging through the roof into the reservoir.

It is planned to use the generated power on site for lighting, alarm, communication etc. The home owners association of the Country Lane Estate have also indicated that it would like to use the power for street lighting. Annually ±131,000 kWh could be generated with this unit, enough to supply 10 households from the pilot plant. 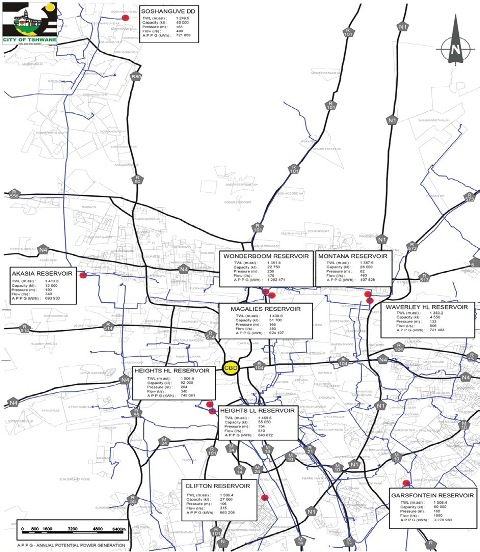 The 10 reservoirs with the highest potential in Tshwane/Pretoria 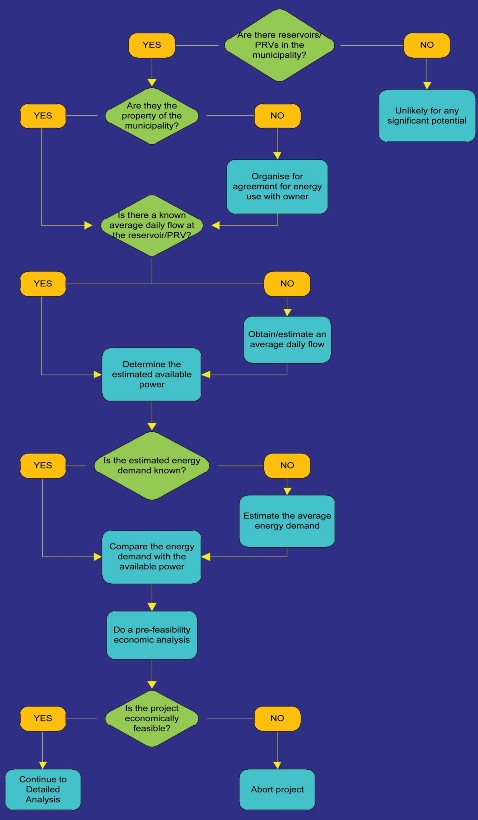 In water is distributed through a large system that includes 160 reservoirs, 42 water towers, 10,677 km of pipes and more than 260 pressure reducing installations (PRVs) that operate at pressures up to 250 m. Geographically speaking, the city of Pretoria has a lower elevation than the bulk service reservoirs of Rand Water which is the main water supply, resulting in high pressures still available. 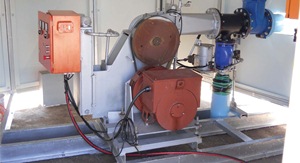 Hydropower represents a nexus of water and energy and in municipalities and water boards there are several locations where a feasible conduit hydropower scheme can be implemented. It was shown using a first order analysis that economically feasible potential might exist at various PRV stations/reservoirs in Tshwane. Further studies are underway to confirm this potential and optimise the design of hydropower plants. As long as people use water electricity can be generated.