Beijing, China — ESI-AFRICA.COM — 03 May 2011 – China “’ the world’s fastest-growing major economy “’ may face a power shortage of 30 million kilowatts during its summer in mid-2011, as the country’s total supply lags behind the increasing growth in demand.

“Some regions are facing shortfalls that are bigger and earlier than last year,” the China Electricity Council said in a report on its website. “Supplies in provinces in the north, east and south will be tight,” the report added.

“The power shortage is worse compared with the previous couple of years, but has yet to have a material impact on the real economy,” Michael Tong, an analyst at Deutsche Bank AG, said by telephone from Hong Kong. “The country may need to consider speeding up generation capacity expansion to stop power shortages from worsening next year.”

Datang International Power Generation Company “’ a unit of the nation’s second-largest power producer “’ gained 9.5% in Shanghai trading, the most in a year. Huaneng Power International Incorporated “’ the listed unit of the biggest electricity generator “’ climbed 6.3%

“If the shortage lasts for more than one year, China may need to approve more coal-fired power projects, but before that, they need to raise tariffs more so that independent power producers will be willing to spend on additional capital expenses,” said Securities Capital Markets analyst Dave Dai in an e-mailed response to questions. “It still depends on where inflation is going over the next few months.”

China’s generation capacity is expected to rise 85 million kilowatts, or 9%, to 1.04 billion kilowatts this year, the council said. The increase is less than its forecast at the beginning of the year because of slower expansion at thermal power units, it added. 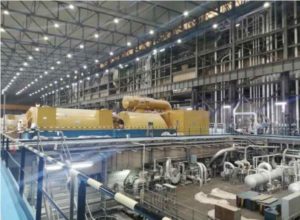 Behind the scenes at a thermal power plant