French solar technology group Solaire Direct is one of many new entrants into the power industry awaiting the outcome of the Department of Energy’s integrated resource plan in the coming few months.

Hammond, however, believes that the feed-in tariff for large-scale photovoltaic (PV) solar power proposed by the National Energy Regulator (R3.94 per kilowatt hour) was too high for rapid development of the sector.

"We’d like to see the R3.94 that has been proposed reduced significantly," he said.

"Given the dramatic reduction in the cost for solar PV in the last two years that number is too high."

He said government had a limit on what it would be prepared to pay for PV power, and the higher the tariff the lower the number of available megawatts would be.

This would mean 30%-40% more capacity being granted under the energy regulator. Solaire Direct Southern Africa is the holding company for the global group’s activities in Southern Africa. It is establishing separate operations in Namibia and South Africa where solar resources are the highest.

In South Africa the company has not yet built any solar power parks, but it is manufacturing PV solar panels which are being shipped to global customers and Solaire Direct’s own operations in France, where 30MW is installed.

This Cape Town factory produces 35MW of panels each year, but is scaling up to 100MW per year in preparation for new projects in SA, Namibia, Botswana and Mozambique. Around 100MW is planned for Southern Africa, with Namibia and South Africa making up the biggest planned developments at 40MW each.

Hammond said: "We’ve had a number of inquiries from some municipalities and in some instances from Eskom where there is new power demand in various areas. But to meet that demand requires such significant upgrade of network infrastructure to bring the power to the point that it is prohibitive.

"Rather than upgrade the entire network there is an argument to build a smaller power station right next to where that power is required. If you put up a solar power station it means Eskom doesn’t have to upgrade the network," he said.

Fossil fuel power costs in Europe and elsewhere in the world are substantially higher than in South Africa. Yet France’s electricity tariffs are the cheapest in Europe – around 70c per kilowatt hour – thanks to its extensive nuclear power grid. Eskom, which has recently increased electricity tariffs by 24%, still charges around 60c per kilowatt hour.

"While South Africans may not want to hear it, we have been paying far below the world market rate for electricity for a long time," Hammond said.

"If you look at the global cost of that fuel, it’s a lot more than what we’ve been paying in SA recently. "The cost of renewables is coming down, and the cost of fossil fuels is going up." 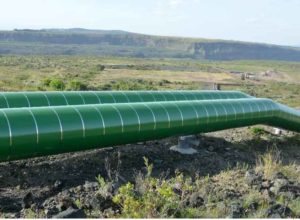