The 89-kilometre transmission line commissioned by Eskom has reached completion after three years of construction. The project was officially handed over to the utility last year. 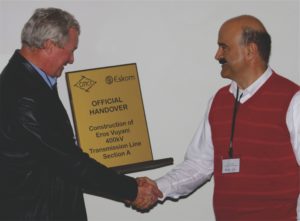 Turnkey power providers CONCO group constructed the 400kv transmission line which runs from the Eros substation close to Harding in KwaZulu-Natal, towards Vuyani substation in Mthatha in the Eastern Cape.

Eskom Project Engineer, Sugan Naidoo says that “the handover was well received by Eskom for the first section of transmission line being built in the former Transkei area which is now part of the Eastern Cape”.

Naidoo added that the “400kV lines transmit bulk power to feed a large number of customers and can power up a town. When the line is placed in commercial operation, the current power shortfall in the Mthatha area and surrounding towns will be relieved and will strengthen the network by supplying sufficient capacity to the area for economic growth”.

The transmission project employed over 400 people over the three years including an additional 200 temporary jobs in the local communities.