Altaaqa Global installed a 54MW temporary power plant in Aden, Yemen over a period of 23 days, and was acknowledged for this achievement at the 2014 Energy Institute Awards on 13 November 2014 at the Sheraton Park Lane.

Altaaqa Global was awarded the Energy Excellence award which highlights the significant impacts made on every aspect of the energy sector from new strategies, creative solutions and innovation. 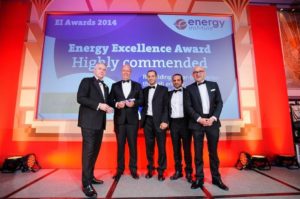 The temporary power plant was constructed to supply power to 150 000 domestic energy users. With Government adding an additional 50MW, the total generation output is 104MW, having the capacity to power nearly half a million residents, Altaaqa said in a statement.

The project supports local content as 95% of the labour force is Yemeni and the remaining 5% are from Altaaqa Global Caterpillar. Not only have jobs been created, but Altaaqa has contributed to skills development and the overall socio-economic environment in Yemen.

Peter den Boogert, general manager of Business Development at Altaaqa Global said in a statement that the team conquered all challenges and reached completion on schedule despite religious holidays and scorching weather.

Other nominees for the Energy Institute Award: