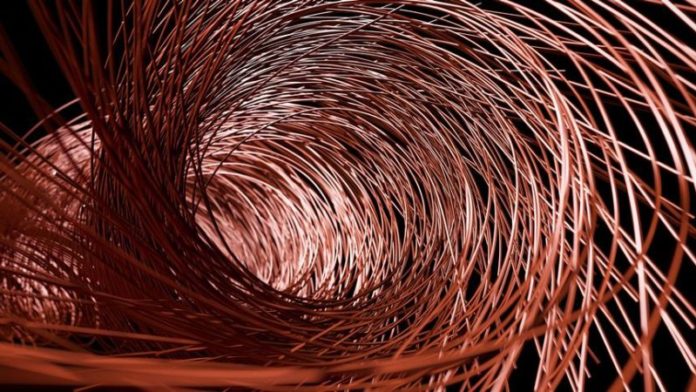 The South African power utility has disclosed that two suspects were arrested in KwaZulu-Natal last week on charges related to copper cable theft.

The parastatal explains that “the arrests took place after a member of Eskom’s investigation team noticed a disturbance at a nearby farm fence and decided to keep an eye on the scene.

“Later that night, the Eskom investigator who had been joined by his team at the scene, noticed a group of four men climbing over the same broken fence.”

Site investigations discovered that a 200m overhead copper conductor had been cut and stolen opposite St. Joseph School, on a farm in Cedara, near Hilton.

“While awaiting members of the investigation team who had proceeded to the farm where they suspected the theft to have occurred, the same group of four men who had been seen climbing the fence earlier were spotted between the Eskom towers rolling and carrying material from one point to the next,” the utility said in a statement.

The state enterprise added that the suspects later placed the rolls of cable outside the farm, in the bush close to the R103 road for pick up.

The suspects proceeded in the direction of the Eskom investigation team, and when close enough, the team managed to successfully apprehend one of the four suspects. The Eskom team gave chase and managed to apprehend the second suspect near the Cedara train station.

The two suspects were handed over to the Hilton SAPS. The stolen material together with two backpacks containing clothes, two hack saw blades, three gloves, and a piece of wire, all found in possession of the suspects, were also handed over to the SAPS and a case of damage to essential infrastructure was opened.

Victims of theft and vandalism

Eskom, along with other state-owned entities and municipalities, is plagued by infrastructure theft – including cable theft – with the value of material stolen remaining a serious concern, as it is indicative of organised, syndicate-driven criminal activity. Read more…

Tebogo Rakau, divisional executive for security at Eskom, said: “It might seem like the only victims of cable theft are organisations like Eskom and municipalities who have to bear the cost of replacing stolen cable and damaged infrastructure, but the effects suffered by society can be even worse, including prolonged power outages which impact businesses, and ultimately lead to job losses.

Rakau thanked all those who have assisted Eskom in the fight against cable and electricity theft. He also urged more people to come forward and report these crimes and perpetrators.

“We urge all South Africans to play a role in the fight against these under reported but serious crimes by sending their anonymous SMS tip-offs to Crime Line on 32211. It is about time that we all played a role in halting the perpetrators of infrastructure and electricity theft in their tracks and bring them to book,” Rakau concluded.