Smart meters in many respects are already part of the Internet of Things (IoT) market, as the meters are often already ‘Things’ interconnected and routed through the Internet.

However, most smart meters run on closed networks built by the utilities themselves to create the smart grid infrastructure, which poses interoperability issues, writes Chris Strauss, research engineer at Conlog.

Within the closed networks of utilities’ smart grid infrastructure, standards – such as Prime Alliance, G3 Alliance, wireless MBus, and ZigBee running application layers like DLMS/COSEM or OMS – ensure some interoperability between multiple vendors, but no interoperability across technologies.

Many of these currently available closed networks rely on repeaters and/or mesh networks to communicate relatively short distances within a relatively small area to a concentrator type device (sometimes called a router, edge router or coordinator), collecting the data and passing it on to the Meter Data Management System (MDMS) through the internet.

Although much work has gone into designing these systems to be Plug-and-Play and self-healing etc., these systems still take a lot of expertise to plan, set up and maintain. The result is a fragmented, often slow system with lots of optimisation and management requirements.

On the other hand, Star network topologies are gaining in popularity as they tend to be less complex to manage than mesh networks. The benefit is that Star networks have fewer potential points of failure and less need for ongoing optimisation. Star also enables longer battery life as nodes are not needed for routing and can go to sleep when not needed. Nodes in Star networks are also less complex as they do not need to deal with complex routing algorithms.

The IoT is expected to grow to 50 billion connected devices by 2023, according to data research company Statista. As the IoT evolves, many new communication options will become available to utilities, many of them Low Power Wide Area (LPWA) networks, which are Star in nature. Provided the network has the range and ability to service all the devices, many utilities may prefer to take advantage of this existing infrastructure rather than building their own.

This should lower overall operating costs by removing the costs of duplicating infrastructure between the utilities and IoT network providers. As each meter is just a ‘Thing’ on the Internet, and not an active part of a mesh network with many interdependencies, meters will stand individually, allowing utilities greater freedom to mix and match technologies and vendors in the same area and even across different networks and service providers.

Low Power Wide Area network options and coverage right now is limited; however, they will almost certainly become globally available soon, and those that are in place provide excellent solutions for utility metering. It must be said that not all solutions will be up to the always-on expectations or data requirements of full-blown smart metering and energy management requirements.

Most of the LPWA networks currently available such as Sigfox, LoRa and Ingenu are making use of ISM bands such as 2.4GHz, 900MHz and 868MHz. The main advantage here is that there is no cost for the licensing of the radio spectrum and hence this saving will hopefully be passed on to the subscriber, lowering the connection cost. The disadvantage of using ISM bands is there is no protection of the spectrum you are using from other users. Over time the band may become congested affecting range and connectivity.

Cellular carriers have for years been providing machine-type communications and these have proven to be reliable and robust but costly (both module cost and connection cost). Cellular carriers are extremely well positioned to quickly create competing LPWA IoT networks as much of the infrastructure servicing the cellular space is already in place.

The cellular carriers have moved quickly to introduce their own LPWA networks to compete with the ISM band providers. This falls under the 3GPP standardisation umbrella and operates in licensed spectrum. Thus, several new standards have emerged. Two clear frontrunners are NB-IoT and LTE-M. Most countries are planning initial rollouts of one of these two protocols, with North America favouring the LTE-M and Europe NB-IoT. Both technologies have clear distinctions between them such as battery life, data throughput, module cost etc. However the ultimate choice is likely to depend on the supported protocol in the area of deployment, at least for the moment.

Cellular carriers are extremely well positioned to quickly create competing LPWA IoT networks as much of the infrastructure servicing the cellular space is already in place.

These technologies provide techniques to improve coverage for meters deployed in challenging locations such as inside buildings or underground basements, which will be essential for this type of network to operate successfully as this is a star network with no immediate way to repeat the signal.

Testing done by Ericsson and Orange in France with EC-GSM-IoT using the legacy GSM 900MHz band showed a seven-fold improvement in range for low data rate applications. This shows that smart meters even in the most challenging locations can be reached.

Ultimately, utilities are conservative by nature and innovative LPWA metering solutions might initially be restricted to the more niche markets such as the tenancy metering space which are more willing to adopt new technology, or until significant deployments in one area have proven the technology. Notwithstanding the significant influence of technology vendors, government involvement, and of course politics, will direct utilities’ final direction and choice.

Some LPWA network solutions are approaching maturity while others are still in their infancy. Not all networks even exist in all areas. As such, it is not clear which technologies will become dominant and which ones will fade over time.

Utilities would do well to look to LPWA networks to provide an autonomous solution for collecting and sending data to and from the meter. In many instances, high current 3 phase meters are interspersed with low current single phase meters, and prepayment meters are mixed in with post payment. Auxiliary devices such as bulk check meters, kiosk tamper detection and street lighting control can be treated in the same fashion.

In such instances, the most suitable meters for each installation can be used without the need to share the same physical network and the conversation can move away from the physical network – to defining common feature sets and how to aggregate the data at a higher level to create interoperability and uniformity from the Meter Data Management System looking back. ESI

Since the inception of the South African prepayment industry in the late 1980s, Conlog has been at the forefront of pioneering solutions that meet the needs of utilities worldwide. The combination of a superior product range, coupled with a desire to meet and exceed our customer needs, has resulted in our leadership position.
www.conlog.com | @ConlogSolutions | info@conlog.com 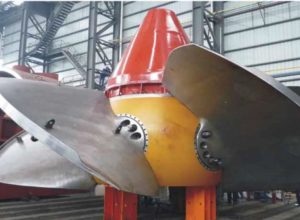 High cost of a Kaplan turbine project: The ‘whys’ explained