In 2011, the South African government launched its Renewable Energy Independent Power Producer Procurement Program (REIPPPP) to accelerate the development of renewable energy in the country. As of June 2016, the REIPPPP had procured 3.4 GW of wind, 2.4 GW of PV and 400 MW of CSP capacity, and had attracted 193 billion rand ($13 billion) of private sector investments.

However, the REIPPPP has stalled after public utility Eskom delayed the signing of Power Purchase Agreements (PPAs) for bidding round 4.5.

A number of projects are yet to reach financial close and many financiers are now funding or considering funding projects outside of the REIPPP program, both in South Africa and in other Sub-Saharan Africa countries.

The South African renewable energy market exploded following the introduction of the REIPPPP. With a total of 200 billion rand in capital committed to it, it has become one of the top five global destinations for renewable energy procurement.

The renewables space in country is dominated by the REIPPPP. In South Africa large scale direct power agreements require regulatory approval and, for connection to the grid, Eskom’s approval, and this adds complexity to project development, investors told New Energy Update.

These approvals are slow processes, as the government remains engaged in REIPPPP discussions with Eskom, regarded as a more pressing concern.

Many bilateral projects that come to NERSA for licensing fail due to lack of funding, as private projects lack the same 20 year payment guarantees as the REIPPPP projects, Mr. Thembani Bukula, a regulatory member of electricity at National Energy Regulator of South Africa (NERSA), said.
Despite the slow development of large scale projects outside of REIPPPP some private bilateral projects have emerged. For example, mining company Anglo American has installed cogeneration technology on site.

The growth of projects outside of REIPPPP is slow for multiple economic reasons, said Marc Immerman, Principal at Lereko Metier sustainable capital fund. Firstly, the price Eskom charges customers is low compared to the REIPPPP renewables tariff and secondly the economy is in a slow and stagnant state so corporates, industrials and mines have been slow to sign up to direct opportunities, he said.

One area where investors are expecting to see growth is in small roof top PV distributed generation, where they are starting to see signs of roof top EPC companies growing and corporates wishing to make their own capital investments, according to Immerman.

“We see opportunities for PPAs in this space, not through the grid, in a direct over the fence arrangement”, he said.

Nevertheless, the market is slow to develop in South Africa and over the next 5-10 years Immerman predicts a drastic improvement in the rooftop PV market, driven by the cost differential between Eskom and private power.

Outside of the REIPPPP, South Africa’s roof tops of 100KW to 2MW are too small for large scale developers and only smaller EPC companies are pursuing these projects, Immerman said (see case study 2).

The Eternity Power Thermal Harvesting project was developed at a total project cost of 150 million rand and commissioned in June 2015.

The plant has an installed capacity of 5 MW of which 4.3 MW is available to the grid, reducing the power Anglo American Platinum’s capacity buys from Eskom.

The solution is aimed at companies with large roof space and constant base loads seven days a week, such as mining companies, commercial property owners and industrial facilities. The PPA offer by PTSI is unique as it allows the customer “buy-back” options during the contract period.

PTSI’s model allows for the system to be built and owned by PTSI and the electricity generated to be provided through a power purchase agreement (PPA). The price of electricity produced by the PV system, will be equal to the tariff currently in place, less a nominal discount.

Beyond South Africa, there have been recent developments in a number of countries for grid-tied procurement systems, including Nigeria, Zambia, Kenya, Senegal, Ethiopia, Egypt and Morocco. Developers who were involved in REIPPPP are actively looking at these programs, said Immerman, who has already bid for projects in Senegal and Ethiopia (see case study 3).

The available finance guarantees vary per country, according to Ira Green, Managing Partner, GGEnergy Holdings. Where payment history of the utility is poor, a financier would likely require sovereign guarantees. However, in most cases the countries are unable to provide these as they have no capacity to provide additional guarantees or could be restricted from providing guarantees under guidelines from international financial institutions like the World Bank or IMF.

Recently, there has been a move towards a Put-Call Option arrangement to guarantee such projects, Green said. In the event of a serious default on the part of the utility, the IPP can exercise the Put Option. However, this will not necessarily cover the equity in a project, only the debt. It also may not provide coverage for slow or late payments.

“Start with a good PPA. Make sure that the off-taker is commercially bound to the commitments in the PPA. Also, make sure that the EPC [Engineering Procurement Contraction company] provides sufficient warranties on the performance and use bonus/malus frameworks to ensure that the EPC provides the highest level of output, even under the O&M Agreement,” said Green.

Under C&I projects, the guarantees are typically balance sheet guarantees of the off-taker, said Green. However, these guarantees create contingent liabilities for the off-taker and/or their parent company that may put limitations on the company’s access to new financing for its own operations, so they are largely moving away from providing such guarantees. In some cases, the impact of these projects on the balance sheet can be mitigated with changes in the commercial structure, which may increase the risk to either the off-taker or the IPP.

Such structures could be JV’s between the parties as well as maximum commitment for power under a threshold, typically less than 75% of the power requirement of the off-taker. In addition, some structures have moved towards an Energy Savings Model, payment for the savings between the legacy power supply and the renewable energy power, or on the basis of a pure Operations and Maintenance agreement.

The insurance requirement is fairly standard with General Risk policies as well as Political Risk covering key issues such as Change in Law or Expropriation, said Green. Due to the complexity and high costs of arranging financing, typically projects must have a minimum capacity size to justify a project financing. Until now this has been about 10 MW but the minimum size of projects is increasing as the cost of renewable energy installations are declining, Green said.

The countries attracting most interest due to the most available projects include renewable energy leaders Nigeria (see case study 4) and Kenya, according to Immerman.

Recent low bids in a Zambia Scaling Solar project of 6 or 7 US cents has shown that Sub Saharan countries are able to capitalise on lower tariffs, Immerman said. Nigeria is offering 11.5 US cents for PV, compared to South Africa’s 5 or 6 US cents for PV. Senegal is also offering 11-11.5 US cents but the tariffs are reducing which, according to Immerman, drives affordability which spurs greater procurement.

The African renewables market is growing in all areas. There are dozens of new Mini/MicroGrid operators (MGOs) emerging and this number will rise, said Green. Energy storage is still expensive, Green said, but it is becoming a bigger part of the mix especially in stabilizing the power from renewable energy projects and for load shifting when peak power tariffs are available.

The deal will allow Lekela to continue to build its pipeline of wind and solar projects in Africa. The platform plans to build four more wind farms in South Africa, two wind farms and a solar plant in Egypt, as well as wind farms in Senegal and Ghana.

Mainstream and Lekela are helping to fulfil the objectives of a series of key international initiatives, including the Obama Administration’s Power Africa, which aims to add 30,000 MW of cleaner power generation through government and private partnerships, and the UN’s Sustainable Energy for All, which seeks to achieve universal access to power by 2030. Energy poverty has been recognized as one of the key challenges for Africa, as an estimated two thirds of people in Sub-Saharan Africa have no regular access to electricity.

Phanes Group, the international solar energy developer, investment manager and asset manager headquartered in Dubai, announced this month it has acquired and will co-develop three 100 MW grid-connected solar PV plants in Nigeria. The ground-mounted projects will contribute to the Nigerian government’s ambitions to generate 2,000 MW of power from renewable sources by 2020.

The projects span three locations, including the Mando area of Kaduna, Birnin-Kebbi in Kebbi and Sokoto in the North-West of Nigeria. The first 50 MW of Phanes Group’s Sokoto project will be gridconnected as early as the first quarter of 2018, and the project is expected to be completed by the end of 2018. The Kebbi and Kaduna projects will be delivered under the Hasken-Rana brand – a joint venture between Phanes Group and its Nigerian partners, and are due for completion before the end of 2019.

This article has been produced in conjunction with the Africa New Energy 2017 conference and Exhibition taking place in Cape Town on March 7-8, 2017.

Financiers are gathering at the event to join panel discussions about investing in, and funding new wind and solar projects in South Africa and other key emerging markets. Key financiers featured on the executive speaker line up include:

Plan to attend the event and you will join 500 wind and solar executives from leading IPP developers, financiers, EPC’s, regulators and local suppliers to unlock new development potential in South Africa and beyond.

Top reasons to be in Cape Town for the event: 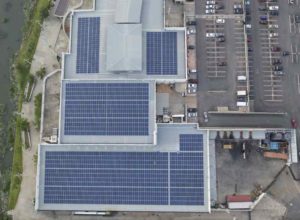