Speaking at the Nersa public hearings in Bloemfontein on Wednesday, Cassim said the ballooning municipal debt, together with the rising Soweto debt, is no longer just an Eskom problem alone – hence the involvement of the inter-ministerial task team that includes, amongst others, the departments of Co-operative Governance and Traditional Affairs, Energy, Public Enterprises, National Treasury, and energy regulator Nersa.

He said the Eskom Board has assessed the ability of the group to continue as a going concern and considered a number of mitigating strategies and actions to address the risks identified.

“What is clear is that Eskom cannot solve financial and operational sustainability challenges that it faces alone. The turnaround of Eskom is a journey over time that is highly dependent on the active involvement of the shareholder, Nersa and other stakeholders including customers,” Cassim highlighted.

Möller, general manager responsible for customer services, said municipal debt rose by 80% in the past 18 months, reaching R17 billion by the end of September 2018. Soweto debt, including interest charges, also rose to R17 billion during the same period.

“Municipal debt continues to rise, and this has become unsustainable. Municipal debt is longer just an Eskom problem, it is a national problem. Eskom continues to participate in the inter-ministerial task team process with a view of finding lasting solutions together with other stakeholders,” said Möller.

He added that Eskom has to date installed more than 80,000 split prepayment meters in Soweto.

Further noting that disconnections of defaulting customers would continue.

Cassim said Eskom has made every effort to control its operating expenditure but it needed, in addition to the savings, more revenue through price increases and balance sheet support from the shareholder.

“If we want to change and make Eskom’s balance sheet sustainable, in addition to Eskom containing its costs, we need to change its returns by prices going up and get it to what is allowed. The shortfall in tariff cannot be solved through cost reductions alone, and while others have pointed Eskom to the debt market, further indebtedness adds to the problem. In the period 2007/2008 to 2017/18 Eskom’s debt has gone up ten-fold compared to price increases that have gone up five-fold.”

Both the Department of Energy through the Electricity Pricing Policy and Government (Government support package) indicate that Eskom should have reached a higher tariff level of approximately over R1/kWhr by 2018.

This would alleviate some of the significant challenges being faced by the company. 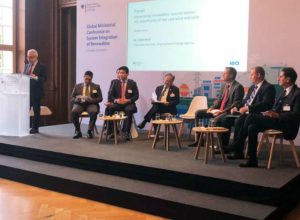