Eskom Expo for Young Scientists has won the 2019 National Science and Technology Forum (NSTF) Award in the Non-Governmental Organisation category.

Read more: Want to see what else Eskom has been up to?

In a company statement, the parastatal explained that the NSTF NGO Award is for any non-governmental organisation which has made an outstanding contribution to science, engineering and technology (SET) and also innovation in South Africa over the last 5 to 10 years.

The category also rewarded technology transfer, education and training activities. Eskom Expo walked away with this award due to its commitment to providing promising young scientists with opportunities to develop their passion for the sciences, while enhancing their depth of knowledge.

Eskom Expo Executive Director Parthy Chetty says this ground-breaking Expo that was started in Pretoria by the late Dr Derek Gray, has rapidly mushroomed into the largest science fair in the country and now on the continent.

“The dream of the late Dr Derek Gray has created a platform for young scientists and engineers to grow their passion for the sciences and realise their full potential, while still in the school system. Universities across the country are now seeking out Expo participants to groom them into researchers and engineers for our country,” Chetty said.

“Eskom Expo takes pride in the NSTF Award and recognition received, and undertakes to continue creating excitement for science through research-based projects, and encouraging more learners to take up science-orientated subjects and careers,” Chetty added.

The very first expo in 1980 featured 198 pupils from Pretoria mainly. Almost 40 years later, the expo features more than 100,000 learners from 35 regions around the country, annually.

While Eskom became the title sponsor of Expo in 2011, the late Dr Derek Gray’s memory continues to be honoured at the organisation, which hosts the biggest science fair on the African continent: The Eskom Expo for Young Scientists International Science Fair (ISF).

The annual fair brings together hundreds of the top young scientists in South Africa where they compete for bursaries to study at universities of their choice and an array of prizes, including the prestigious University of Pretoria (UP) Derek Gray Award.

It includes a full bursary to study at the University of Pretoria and a fully paid trip to Stockholm, Sweden and the Nobel awards ceremony annually in December, where the participant has the opportunity to present their project to the king and queen of Sweden. 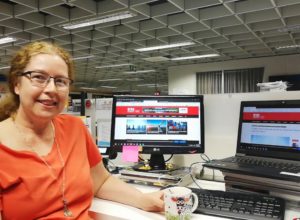 Highlights from #SONA2020: In case you missed it