More than 9.8 million people were employed in the renewable energy sector in 2016, according to a new report from the International Renewable Energy Agency (IRENA).

“Falling costs and enabling policies have steadily driven up investment and employment in renewable energy worldwide since IRENA’s first annual assessment in 2012, when just over seven million people were working in the sector,” said IRENA Director-General Adnan Z. Amin.

Amin added: “In the last four years, for instance, the number of jobs in the solar and wind sectors combined has more than doubled.

“Renewables are directly supporting broader socio-economic objectives, with employment creation increasingly recognised as a central component of the global energy transition. As the scales continue to tip in favour of renewables, we expect that the number of people working in the renewables sector could reach 24 million by 2030, more than offsetting fossil-fuel job losses and becoming a major economic driver around the world.” 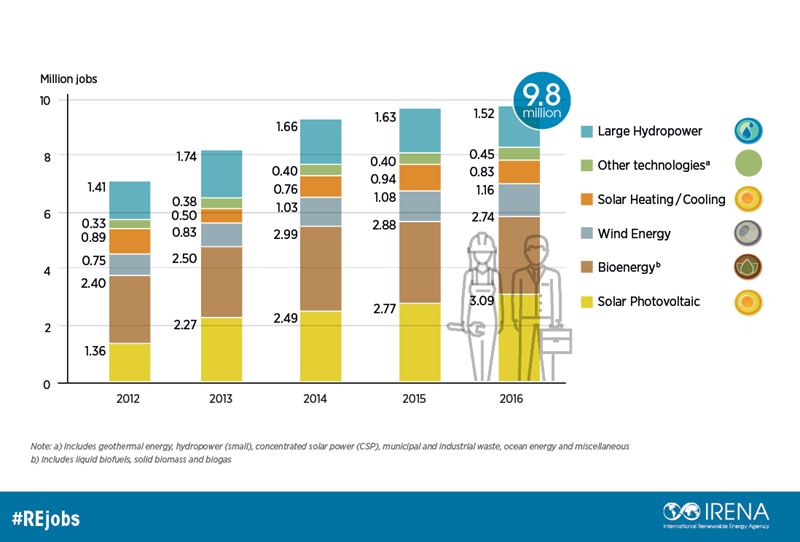 When accounting for direct employment in large hydropower, the total number of renewable-energy jobs globally climbs to 9.8 million. China, Brazil, the United States, India, Japan and Germany accounted for most of the renewable-energy jobs. In China for example, 3.64 million people worked in renewables in 2016, a rise of 3.4%.

In the United States, jobs in the solar industry increased 17 times faster than the overall economy, growing 24.5% from the previous year to over 260,000. 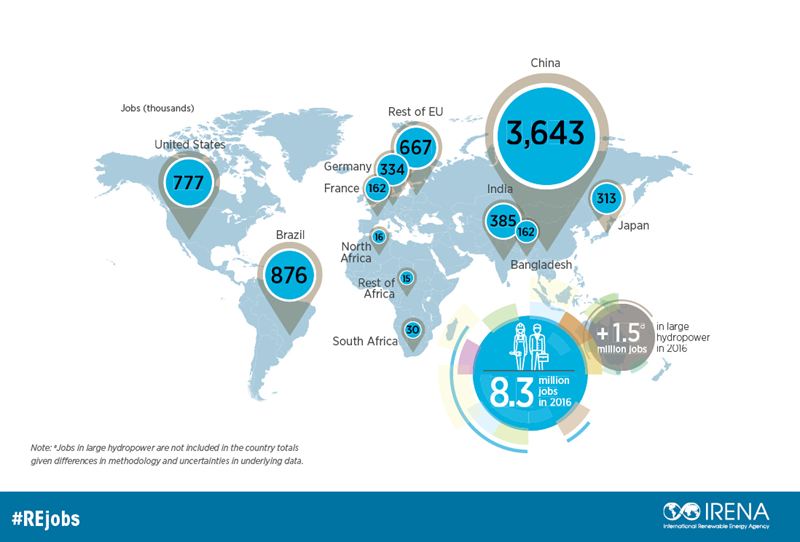 “IRENA has provided this year a more complete picture on the state of employment in the renewables sector, by including large hydropower data. It is important to recognise these additional 1.5 million working people, as they represent the largest renewable energy technology by installed capacity,” said Dr. Rabia Ferroukhi, Head of IRENA’s Policy Unit and Deputy Director of Knowledge, Policy and Finance.

The report finds that globally, 62% of the jobs are located in Asia. Installation and manufacturing jobs continue to shift to the region, particularly Malaysia and Thailand, which has become global centre for solar PV fabrication.

In Africa, utility-scale renewable energy developments have made great strides, with South Africa and North Africa accounting for three-quarters of the continent’s 62,000 renewable jobs. 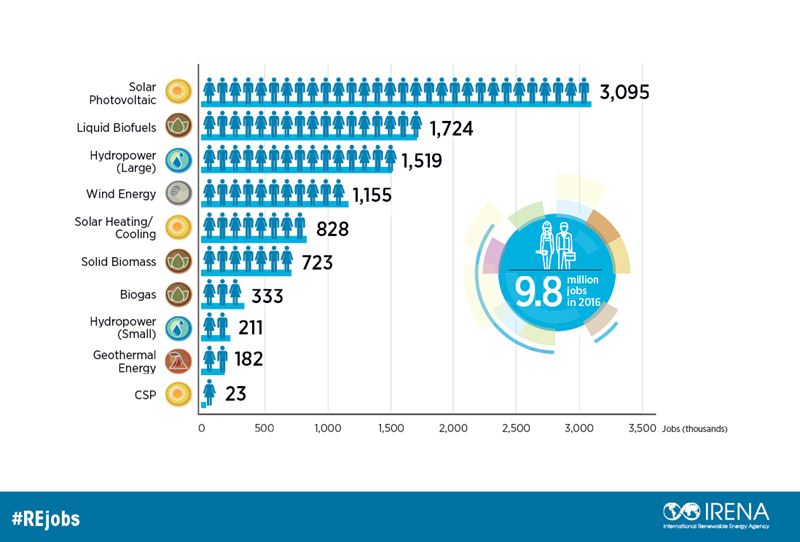 “In some African countries, with the right resources and infrastructure, we are seeing jobs emerge in manufacturing and installation for utility-scale projects.

For much of the continent however, distributed renewables, like off-grid solar, are bringing energy access and economic development. These off-grid mini-grid solutions are giving communities the chance to leap-frog traditional electricity infrastructure development and create new jobs in the process,” Dr. Ferroukhi said.