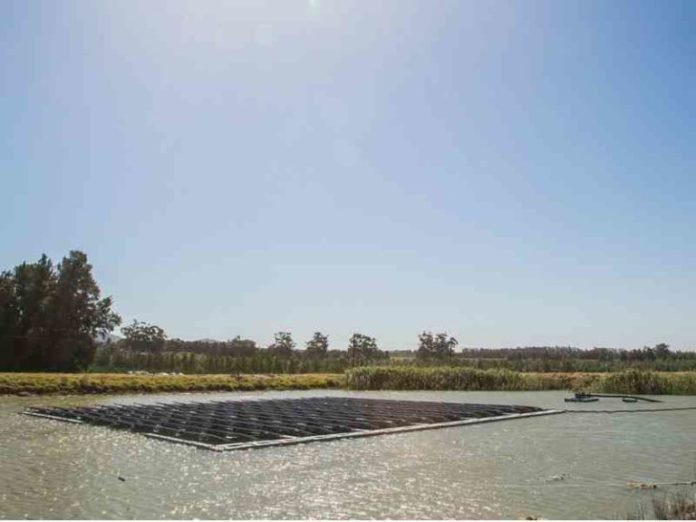 One of the oldest family businesses in South Africa has been inspired by the clean energy revolution, having installed an aesthetically pleasing floating solar system on their fruit farm just outside of Franschhoek. Found on the picturesque farm Marlenique Estate, the solar system totals 594 kWp comprising 60 KWp from floating solar as well as 534kWp from a ground mount system.

Due to rising energy prices and a high energy demand from its cold storage, irrigation and venue facilities, a microgrid system provided the best long-term solution for the farm. The system also provides critical energy security due to continued unreliable supply from the state-owned power utility, Eskom.The first phase of the project allows the farm to run 80–90% on renewable energy on an annual basis. The farm’s energy intensive packhouse, cold storage facility, irrigation systems and conference and wedding venue are all run from the new system. The second phase includes the installation of battery packs, which will remove them from the grid completely.

The farm’s financial director, Carl van der Merwe, said this strategic decision to install a microgrid system was largely due to the rising costs of farming, and the impact of the drought – resulting in input costs and direct production costs escalating more than the farm’s sales (revenue) per year.

Once the installation was complete, it would reduce their carbon footprint by half. “Marlenique farm is the highest energy user in our portfolio. We are aiming to be 100% green through solar energy solutions across our entire portfolio in the near future.” The system has been designed and installed by the renewable energy provider, New Southern Energy, a full service renewable energy provider for distributed energy projects throughout Africa. At commissioning, the system was the first commercially operated floating solar system on the continent.

The system overview includes:
• 594kWp solar system (60kWp floating and 534kWp ground)
• An internal AC reticulation upgrade and consolidation of connection points
• The installation of a backup generator to run the internal grid in the event of power outages
• Provision for infrastructure to allow for a battery system to be included during phase two to take the site completely off-grid

The floats are made from high-density polyethylene which is recyclable. They are highly resistant to UV exposure and corrosion with a 20+ year lifespan, and therefore don’t contaminate the water they are on. In total, both solar parks will reduce their carbon footprint by more than 50%. Surprisingly, the floating solar park has become a haven for the animals in the dam, acting like an artifcial reef of sorts with fish using it for cover and birds as a perching spot. As a result, the system has to be cleaned regularly. On 1 March 2019, the official inauguration of the plant was met with praise and optimism from government officials. Minister of Economic Opportunities Beverley Schafer expressed her excitement to see a business like Marlenique, which creates jobs in the rural economy by investing in the kind of technology that creates a reliable, clean energy source. “As the Western Cape Government, we have been encouraging businesses to invest in solar PV and alternative energy sources as a way to build resilience and protect the economy against shocks like power outages and water shortages.”

Considering Africa’s need to become less reliant on coal, as well as its access to the sun’s energy, more projects such as this are feasible and within reach despite project delays. One delay this project experienced and overcame was putting the floating solar onto the dam. A custom scaffolding was made in order to slide the panels onto the dam with ease. The manufacturer of the floating solar, Ciel et Terre, have been proudly developing large-scale floating PV plants for commercial, government and non-profit institutions worldwide since 2011.

The project was financed through Nedbank Agriculture with the savings from the system allowing the farm to operate cash-flow positive from day one, while paying the asset of over 10 years. With a long-lasting life-space the benefits of the system will be passed on for generations to come.