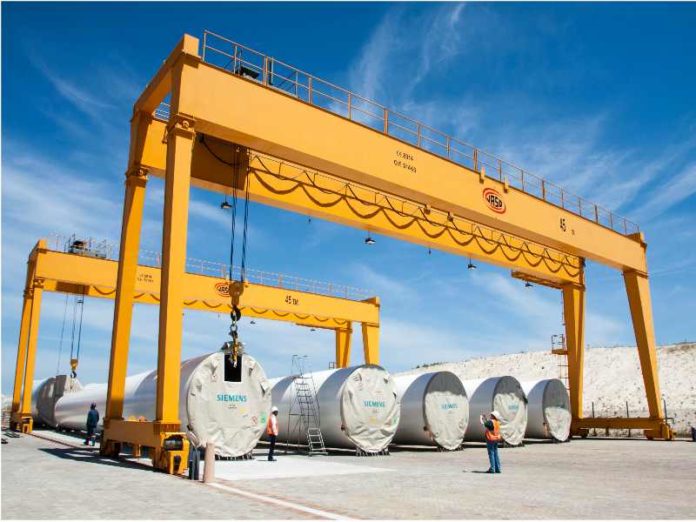 This signals the recovery of the Special Economic Zone (SEZ) for Green Technologies, which according to GreenCape, has already attracted R680 million in green technology investments and has created over 300 jobs.

Manufacturing industries, in particular, stand to benefit from wind farms that are currently being constructed around the country. Read more: New programme to fast-track adoption of offshore wind energy

Two of these large power generating plants, will be receiving their turbine tower sections from GRI, a Spanish wind tower manufacturer. The towers are manufactured at the Atlantis-based facility and assembled on site.

The tower sections are transported individually to the wind farms (via road transportation), on abnormal load trailers – the longest component/trailer (combined length) is almost 58m.

Prior to designation of the SEZ, GRI had made the most of the City of Cape Town’s available infrastructure and rapid land release and approvals process to land them on their chosen ground.

“GRI’s South African wind tower company is 25% owned by local Black shareholders, whilst their 250 or so employees have benefited from skills transfer, some seeing training and experience in Spain and the US, and bringing their skills back to the community,” explained Francis Jackson, SEZ Project Executive, GreenCape.

The Atlantis Green Technology SEZ was a deliberate effort to create manufacturing, broadly in the green economy, and with specific opportunities in renewables.

Wind Farm is situated in the Nama Khoi Municipal area, in the Northern Cape. This province is the recipient of the majority of IPPs from the latest bid window, green-lighted almost a year ago.