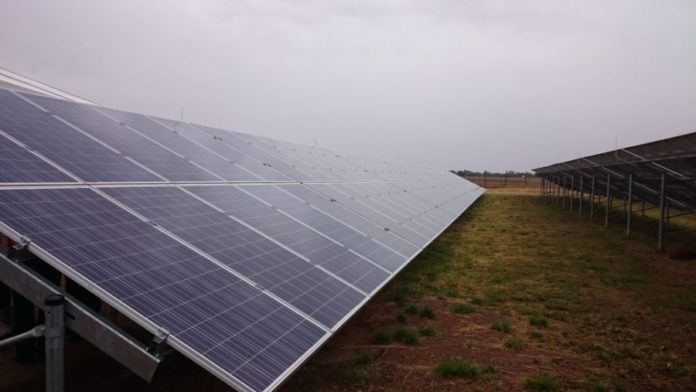 This plant marks the third PV plant in ACSA’s airport portfolio. The first solar installation was at the George Airport shortly followed by Upington, which was simultaneously commissioned with Kimberley.

Attending the official launch was South African Minister of Transport, Dipuo Peters who applauded the efforts gone into the rollout of the three solar plants, adding that these actions are contributing to South Africa’s efforts with regards to “green transport and reducing CO2 emissions”.

Occupying 700m2 of land, the Kimberley PV plant has 1,620 PV panels and 18 inverters, which feed into a 11kV substation located on the airport’s land.

[quote]The PV installation has created 36 jobs across the construction and operation phases, with learnership opportunities in the pipeline.

Speaking to ESI Africa, ACSA Regional Airports GM, Jabulani Khambule, said that the company is in discussion with the Nelson Mandela Metropolitan University in PE, to train and upskill students to operate a PV power plant of this scale.

As part of ACSA’s energy strategy, it has retrofitted the Kimberley airport to include LED runway lights as well as LED outdoor security and parking lights.

To date, the Kimberley plant has generated 141,870kWh and is forecasted to produced around 927,000kWh per annum.

According to Khambule, the company is investigating the idea of adding gas and wind generation to diversify its energy mix – ideas that could potentially reach conception around 2020.

Sharing ACSA’s business model with interested regions is something that the Airports Company is willing and able to do, according to Khambule: “We are willing to share and educate others in terms of how to do these types of projects.”

He added: “We have a business unit called Business Development, which is in the position to consult and sell airport solutions to other airport companies who require expertise in running their airport.”

With efforts to establish ‘green airport’ status, Khambule said that the company’s 2024 plan includes producing 42% of its total energy consumption from renewable power.