The Public Investment Corporation (PIC) on behalf of the Government Employees Pension Fund (GEPF), has committed to advance a R5 billion ($411 million) bridging facility to Eskom for one month.

The loan will fund the parastatal’s operations during the month of February 2018.

According to a company statement, PIC explained they were approached by the South African state-owned utility, which indicated that it was experiencing enormous liquidity constraints, which were threatening the company’s going concern status.

PIC then underwent its own due diligence and received consent in line with its mandate and corporate governance requirements.

According to both financiers, they take comfort from the fact that the bridging facility is fully backed by a government guarantee and that the pricing for this transaction is favourable to GEPF.

The PIC and the GEPF are encouraged by the recent changes in the governance of Eskom.

Dr. Daniel Matjila, CEO for the PIC, said: “The GEPF and the PIC are encouraged that the new Eskom Board and the new management team have moved with the necessary speed to restore good corporate governance at Eskom.

“The utility announced their interim financial statements last week, which had previously been delayed, in a frank and transparent manner.”

PIC further noted that in addition to the bridging facility, Eskom has approached other lenders as the utility needs a total funding of R20 billion ($1.6 billion).

Three commercial banks have indicated that they are willing to further extend credit facilities to Eskom subject to the outcome of their respective due diligence processes, which are currently underway. 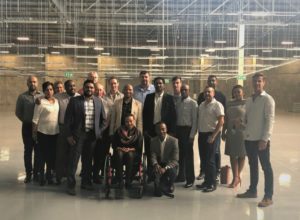 Keys to the new Conlog HQ have been handed over