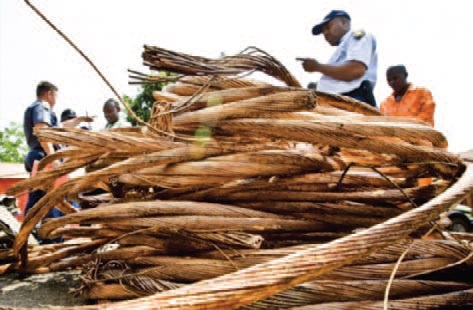 On Wednesday, South African power utility, Eskom, reported that through its security investigations nine copper thieves have been captured in the space of one week in separate incidents across the country this month.

The parastatal said in a statement that the first two arrests were made near the Paardevlei farm in the Western Cape and in Hendrina, Mpumalanga.

Two days later, three more suspects were apprehended at the Majuba Power Station in Mpumalanga when they illegally breached the power station parameter fence. Among the equipment that was confiscated included a hacksaw, six hacksaw blades and three stanley knives, which, investigators believe, were going to be used by the suspects to cut and steal copper cable at the power station.

A day later a further three suspects were caught in Wellington in the Western Cape while they were busy loading stolen copper cable into the back of their bakkie. The arrest came after an Eskom contractor found the stolen cable hidden in the veld and waited for the suspect(s) to collect the stolen goods. The suspects were arrested on the scene and handed over to the Wellington SAPS.

The ninth arrest was made on 20 November in Howick in KwaZulu-Natal where the suspect was found in possession of copper cable that he could not provide proof of ownership for. The suspect remains in the custody of the Howick SAPS.

In addition to the recovered cable, an array of tools was also confiscated in the arrests including hacksaws, bolt cutters, pliers, knives and a vehicle that was used to transport the stolen cable.

Cable theft remains rife across the country, with the effects felt across all sectors of the economy.

Eskom explains: “When a cable is cut by thieves, power supply is lost to the affected areas for extended periods, resulting in the disruption of electricity supply to train services, traffic lights, businesses and homes.

“An even more worrying trend is that thieves are now targeting Eskom and municipal power stations. When production at a power station is disrupted, restoring electricity production can take days or even weeks, and the effect on the economy can run into millions.”

Combating this crime, which costs the economy between R5 billion ($356 million) and R7 billion ($499 million) a year, is everyone’s responsibility. All residents can make a difference by reporting cable theft via anonymous tip-offs on SMS to Operation Khanyisa on 32211 (R1/SMS).