World leaders are being asked to put recycling at the top of their 2018 New Year’s resolution list, by committing to seven changes to help save the planet.

The first ever Global Recycling Day – March 18, 2018 – is an international initiative, designed by the Bureau of International Recycling (BIR) to raise awareness of the need to shift the global perception of what we consider as waste into one of the earth’s most valuable resources.

In the power and energy sector, leaders have been driving better use of natural resources through increased solar, wind and biomass generation as many parts of the world are experiencing the rapid decrease of oil and natural gas reserves. Read more…

The Earth has six primary natural resources – water, air, oil, natural gas, coal and minerals – but many are are fast becoming scarce resources.

The Seventh Resource – the goods and materials around us which we have a duty to use and reuse – can be used time and time again, sometimes indefinitely.

Each and every year, the Seventh Resource (recyclables) saves over 700 million tonnes in CO2 emissions, offsetting all CO2 emissions generated by the aviation industry annually.

BIR, through Global Recycling Day, is asking the world to collectively think Seventh Resource, and to prioritise its use across the planet.

Every person on the planet has a carbon footprint which is contributing to climate change and threatening the future of Earth. In 2016, there was a record surge in C02 levels.

This can only be reduced by re-thinking the way in which waste is disposed.

BIR has created a list of seven concrete commitments it is presenting to world leaders, changes needed to prioritise Seventh Resource, and changes which will be central to Global Recycling Day’s mission. 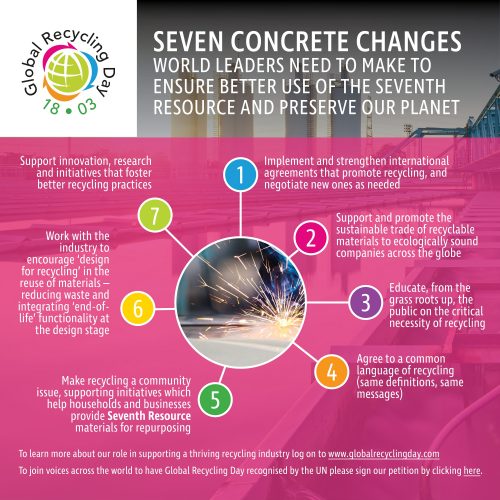