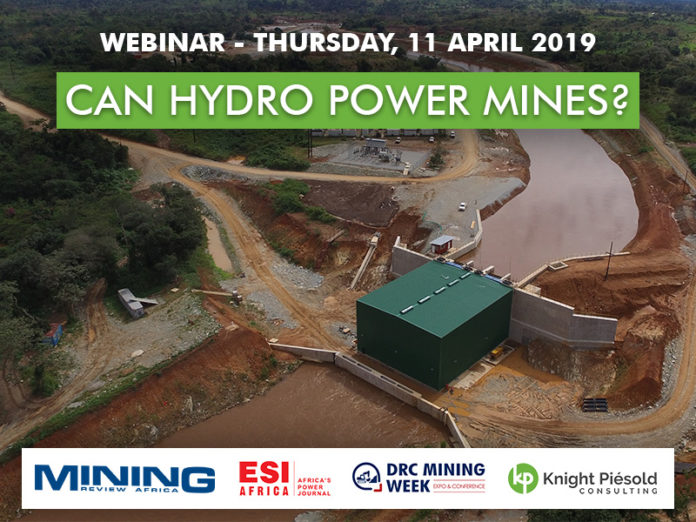 LISTEN TO THE DISCUSSION HERE

Whether pumped hydroelectric, run-of-river, or small hydropower systems there is a growing need to use Africa’s vast hydro potential to boost reliability of power in remote areas, and specifically for the mining industry.

The potential is there, however, it’s not without its financial, operational and environmental challenges.

1. How can hydropower development benefit new and existing mining projects in remote parts of Africa?

2. Weighing in on the financial benefits – capex vs. opex vs. traditional diesel power supply.

3. How to incorporate hydropower into organisational corporate social responsibility for communities

5. How can hydropower projects mitigate the effects of climate change to remain a relevant source of power for mining operations?

Robert specialises in dams and hydropower engineering. With a decade post graduate experience, he has designed all types of dams, ranging between 5m to 260m in height. His fields of expertise include flood hydrology, hydraulic design, reinforced concrete design and detailed structural dam design and analysis. He has detailed understanding in non-linear static and dynamic finite element analysis of arch, arch/gravity and arch-buttress dams and has performed a number of thermal studies for major RCC structures. He is actively engaged in hydropower and has worked on mini to large hydro installations. This includes due diligence assessments of existing installations, detailed design, transient analyses, energy simulations, economic evaluations and construction supervision of HEPP schemes in Southern and Central Africa.

Dr Rudo Angela Sanyanga has more than twenty years’ experience in freshwater ecology, water and sanitation field. She previously worked as an aquatic researcher on Lake Kariba, a lecturer at the University of Zimbabwe, Bindura and later at Whitman College (US);  a research manager for the Institute of Water and Sanitation and a senior partner for Water & Environment Consulting Company in Zimbabwe. Her work over the years has included advocacy for the protection of rivers and wetlands. She has also served as an external examiner for the University of Limpopo and University of Zimbabwe. Rudo has a Master’s degree in Applied Hydrobiology from the University of Wales Cardiff and a in Systems Ecology from the Stockholm University, Sweden.

In his previous position as Head of Capital and Operations for Randgold Resources Corrie held at decision-making seat at EXCO level. Corrie’s background in metallurgy include achievements in engineering, power generation and underground mining, as well as the feasibility and design, construction, commissioning and operation of not only the Kibali Gold Mine processing plant, but also the hydropower micro-grid and underground vertical shaft, complete with fully automated production level and material handling system.

LISTEN TO THE DISCUSSION HERE