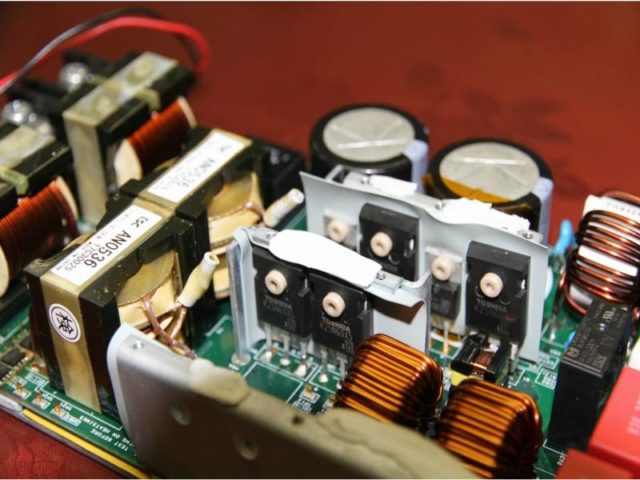 Nowadays, semiconductors are everywhere, hidden within the electronic devices that support our everyday lives. Of particular interest, however, are power devices—a type of discrete components. Demand for these is expected to increase in the coming years, in the automobile and industrial machinery sectors, amongst others.

This interest is a result of the world’s heightened awareness of environmental conservation. Reducing power consumption and carbon dioxide (CO2) emissions is absolutely integral to the realization of low-carbon societies throughout the world. But how to do this without inconveniencing ourselves, and possibly lowering our quality of life? Power devices are one answer to this seemingly impossible question.

Here we look into power devices and discuss the possibilities that they afford, both now and into the future.

The rise of electric cars, and the timely focus on semiconductors for automotive applications

“Power devices are used mainly to control electrical energy, and are used in modern society in all kinds of things. Power supply units for our computers, household appliances like refrigerators and washing machines that run on motors, vehicles like trains and electric cars, and even industrial machinery used in factories. These are all fields with a lot of potential for growth, what with the recent trend towards energy conservation.”

So says Shoichiro Kurushima of Toshiba Electronic Devices and Storage Corporation. The company, which has been involved in the semiconductor business for many years, manufactures a wide variety of power devices, known to be some of the best in the world. In fact, many of the products we use so casually and regularly in our everyday lives are powered by these Toshiba power devices.

Toshiba has long manufactured power devices in factories in Ishikawa Prefecture and Hyogo Prefecture. With the recent trend towards energy conservation, the company has expanded their production volume at these sites.

“Other components in things like refrigerators and air conditioners end up consuming a huge amount of energy. Power devices, with their inverter control, can make small adjustments in energy output, and make more efficient use of the energy.”

Of particular interest is the electric car market, where demand for power devices is expected to expand the most in the coming years. This is because power devices are absolutely integral to the function of electric cars.

“Electric cars, and other cars that have more of a respect for the environment, will only increase in the future. That’s why we at Toshiba want to work even harder at developing power devices for cars. The major car manufacturers have been coming out with more and more types of electric cars, and it’s only a matter of time before electric cars become commonplace in our society.”

But how do power devices work? How do they save energy? The real answer involves all kinds of high-level, sophisticated systems. Here, we asked Mr. Kurushima to give us a simplified explanation of their mechanisms.

“The basic principle is the same as in a washing machine, for example. Turn the switch on, and the motor starts running. Turn it off and it stops. In power devices, there are some adjustments made to this basic circuit, and the switch between the on/off states is faster, in the kHz (kilohertz) level. This allows power devices to optimize the number of rotations, and save energy. Of course, there’s still what’s known as switching loss, a kind of excess power consumption, but even then, there’s a lot more energy saved than if it’s kept on the whole time.”

Electric cars run on the electricity stored in its rechargeable batteries, which are used to power the motor. There are all kinds of other electronic equipment installed in these cars, however, and all of these require the electricity to be converted to different voltages and electric currents for optimal function. This is where the power devices come in.

Power devices and the push towards our sustainable development dreams?

It’s not just electric cars that stand to benefit, however. Power devices have the potential to improve our overall power grids.

Power plants are generally located far away from urban areas. This gives rise to an issue, shared throughout the world—how do we transport energy to where it needs to be, without power loss? The lower the amount of power loss, the more efficiently we can use our energy, which decreases the burden on the environment and allows for the development of more sustainable societies.

Cleanroom in the Toshiba semiconductor factory in Ishikawa Prefecture

Power devices are even now undergoing considerable evolution. Previously, most semiconductors were made of silicon. Some of the newer semiconductors in development, however, are made with new materials like silicon carbide and gallium nitride, for even higher performance.

These new materials are expected to strengthen the energy conservation element of power devices, reducing the power loss of semiconductors in general and lowering power consumption. These new semiconductors are currently in use in some railway vehicles, like trains and bullet trains. And indeed, once manufacturers succeed in lowering the cost of the materials, they may come to comprise the majority of semiconductors in the future. This evolution is, of course, expected to decrease the burden on the environment and improve our quality of life—worthwhile endeavors towards which we at Toshiba work as well, in our R&D of higher-performance semiconductors.

Power devices will help drive the push towards energy conservation in electronic products, and support the establishment of low-carbon societies. Power devices, as behind-the-scenes as they are, may not be something that interests the general consumer. Without them, however, we perhaps wouldn’t have the quality of life we take for granted today.

Workplace health and safety in the age of coronavirus