The US yesterday outlined its Africa strategy by reiterating its commitment to strong partnerships with key countries in Africa, specifically naming Kenya as a target for future US aid and investment.

The US said it would also seek to promote intraregional trade and commercial ties with its African allies, shifting its focus from “indiscriminate aid” to one of trade and investment and positioning itself as a more sustainable alternative to what it termed “predatory” Chinese and Russia interests in Africa.

According to Wildu du Plessis, head of Africa for Baker McKenzie in Johannesburg, “Africa needs strong partnerships in order to address its development challenges so that its full economic potential can be reached. As such, the US is already seen as a major player in infrastructure investment in Africa and its renewed Africa policy of sustainable engagement with allies could be seen as strengthening its role in Africa’s development.”

Du Plessis says that Africa on the whole still suffers from massive under investment. According to the African Development Bank (AfDB), poor infrastructure has cost the continent a cumulative 25% in growth in the last two decades. The World Bank estimates that the continent needs more than $90 million per year to begin bridging the infrastructure gap.

However, there are many positive developments on the continent. In many African countries, governance has improved which has accelerated growth and made investment easier. Africa’s GDP is expected to grow to 3.7% in 2019 and countries such as Ethiopia and Ghana, for example, have enjoyed some of the world’s fastest growth in recent years.

In addition, a rapidly growing middle-class, improved access to new technology and an increased focus on regional integration in Africa has boosted trade and roused the interest of foreign investors.

“Increased US interest in Africa is also a counter to Chinese largesse in Africa and other emerging markets as it is reportedly concerned about the security implications of China gaining control of strategic assets as a result of unsustainable borrowing by some developing countries,” says Du Plessis.

The US Power Africa programme reported that since its inception five years ago it has funded 80 transactions valued at more than $14.5 billion that is now either online, under construction, or have reached final close.

The programme remains fully funded. The decision by the US in October to turn the Overseas Private Investment Corporation (OPIC) into the International Development Finance Corporation and double its lending ceiling to $60 billion will also significantly accelerate the race to invest in Africa.

“The US has now explicitly linked its economic and security interests with its investment and aid in Africa. From an African perspective, real progress will still require a plurality of investors – particularly from the private sector – and movement towards the strong legal and regulatory frameworks required to make projects bankable for the long term. Governments should cautiously monitor developments until the longer term implications of the new US policy become clearer,” he adds. 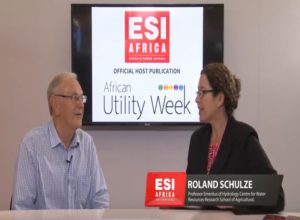 Water sector Prof has climate change on his mind