The challenges include reducing the impact of electricity in the vehicles, the affordability of the vehicles and easy access to refueling sources that will ultimately increase mobility for all, BMW said in a statement on Thursday.

Deena Govender, Head of Customer Relations at BMW South Africa, stated: “[…] Once we have economies of scale and market acceptance, costs will come down. The challenge is ultimately to achieve a balance between mobility and utility.”

The factors regarding price will resolve themselves as market demand increases. The challenge, however lies in developing unique solutions for charging the vehicles. It is here that BMW’s partnership with GridCars is beginning to deliver solutions.

At the centre of creating a charging system for BMW – and ultimately South Africans – is the owner of GridCars, Winstone Jordaan.

BMW had already been in contact with a European supplier and was told that they could only deliver what BMW required in about six months. Jordaan met with BMW locally, promised results in 30-days, and delivered.

The Pretoria-based physicist’s company tackled the most common problems facing refueling points, and came up with unique solutions that have been entirely self-funded. The company now employs eight people and is currently the only company in South Africa in this field.

GridCars has used an open-charge point protocol to develop software that feeds both into the hardware from the front-end, and from the back-end to the aggregator, which houses all the information needed for BMW electric vehicles.

The system will ultimately allow the driver of an electric vehicle to use in-car technology to identify where charge points are located, and to book a charging slot exclusively for the vehicle. This is vital for a process that can take up to four hours when a battery is completely discharged. The objective, however, says Jordaan, is for a car to be on charge when it is not in use, thereby maximising the charge and range of electric vehicles.

Another convenience of the GridCars solution lies in its billing system. The charge point acquires the vehicle and driver information and automatically consolidates all costs incurred on a monthly invoice, so that a single amount is paid by the driver.

The advantage of the billing system is that this occurs, even though electricity points may be owned and operated by different companies. In itself, this solves a major problem by allowing various suppliers to enter the market with charge points and reducing the volume of points required for a supplier to become viable.

Ethel Nyembe, Head of Small Enterprise at Standard Bank said: “The pay-off for GridCars, […], will be fully realised when electric or plug in hybrid electrical vehicles become common on South Africa’s roads. The system will be available to every electric or plug in hybrid electrical vehicle entering the country, making the system streamlined and available to all.”

“This is a win-win situation for South Africa. Instead of having an environment where key technologies would have to come from Europe, all the development and installation will take place locally. We will be the winners through the creation of a new industry and the development of jobs in a technical arena – something that is vital to our continued economic growth”, concluded Nyembe. 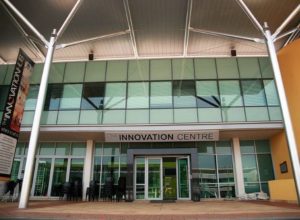 The Innovation Hub: Utilities should be creative