In her inaugural speech the new Association of Municipal Electricity Utilities (AMEU) president, Refilwe Mokgosi, welcomed participants to the landmark technical convention themed on ‘the impact of the energy revolution on the power utilities in Africa’.

According to Mokgosi – who has been handed the baton of responsibility during a period wherein the sector is going through some significant challenges – there is a strong view that the current energy sales of the kilowatt business model is “dead”.

Mokgosi pointed out that the energy and power industry is “now in the early stages of a new era, deemed the 4th Industrial Revolution”. Read more: AMEU new leadership to usher in energy 4.0

She continued: “In retrospect, all past revolutions appear like dress-rehearsals to the main event. According to scientists, soon we will be able to grow humans in laboratories and might even be able to download our brains onto computers. All of this is mind-boggling to say the least.”

This revolution is reimagining government, education, healthcare, and commerce – and the AMEU president asked convention attendees to ponder these questions:

For her presidency period, Mokgosi announced that she would like to see the sector and the AMEU advance technology and invest in research and innovation.

She further announced that her leadership and stewardship will focus on the AMEU (together with its chosen partners) playing a critical role in addressing the challenges outlined above.

This focus will endeavour to embark on initiatives and programmes that will ensure the continued and sustained financial viability of all utilities, she stated.

Looking to keep past president Sicelo Xulu’s legacy of the WIE programme alive, she said: “We all know how crucial it is for the sector to accommodate females within the industry, I will, therefore, remain interested in the subject of women empowerment.”

Ultimately, Mokgosi seeks to prepare the AMEU to effectively and efficiently face the impact of the 4th Industrial Revolution and have programmes that will assist the government and the education system to align with the future.

In closing, she poised a pertinent question to the audience: “Do you think as a country we are investing in the right future energy networks?” 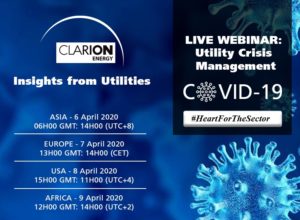