In its quest to mobilising funds to accelerate access to electricity, the African Development Bank has pledged to provide $12 billion for renewable energy projects.

Last week, the multilateral financial institution stated that the funds will be spent over the next five years under the African Renewable Energy Initiative of the Africa Union (AU), the Standard Media reported.

Speaking at the recently ended UN-led climate change talks in Marrakech, Morocco, the African Development Bank (AfDB) officials said the financing will empower countries to scale up harnessing of their renewable energy potential.

The Bank’s president Akiwumi Adesina said the fund will help African countries add value to what they produce, speed up industrialisation and move to the top of the global value chain.

Media reported that Adesina explained that through the new facility, the AU countries will be expected to re-position themselves to implement the Paris Climate Change Agreement.

The Paris Agreement, which came into force on 4 November 2016, consists of 200 countries that have agreed to limit global warming to 2°C above pre-industrial levels.

The AfDB’s President also noted that on top of the $12 billion that the bank has earmarked for the initiative, Germany has committed €2 million ($2.1 million) towards the project, adding that France also committed €6 million ($6.3 million) to support the AfDB Independent Delivery Unit.

Also at the COP22 meeting, the bank received additional funding commitment from the United States Agency for International Development (USAID) through the Power Africa initiative.

The Bank-led Sustainable Energy Fund for Africa (SEFA) initiative was awarded a second tranche of funding of $11 million by USAID, in fulfilling its overall commitment of $20 million.

Hott said: “Reaching universal access by 2025 will require us at the African Development Bank and our partners to build a robust and dynamic pool of skills, finance and technical content to effectively, efficiently and urgently reach communities that are most in need.” 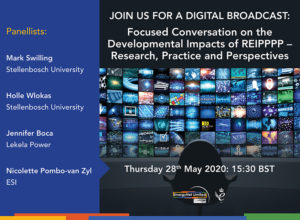 Webinar recording: Focused conversation on the developmental impacts of REIPPPP