Although all types of utilities use radio frequency spectrum to support their mission critical functions, it is typically electricity utilities that are by far the major users. It is thus crucial that policy makers recognise that utility communications are a fundamental requirement to ensure the reliable, safe and efficient operation of power systems – to quickly isolate faults, monitor system stability and status, and to restore power when problems are encountered. It is also important to note that without a dedicated and reliable internal communications network, an electricity utility simply cannot function.

The critical nature of utility communications dictates that supporting networks be designed and implemented to meet the demanding requirements of a typical electricity utility. Consequently, the network is required to operate efficiently even during the most abnormal circumstances – including blackout situations. This degree of availability demands a level of redundancy that will never be considered cost-effective in a commercial environment. Also, electricity utility installations (power stations, substations etc.) are quite often located in remote regions where it is simply not viable in terms of financial return for a commercial operator to construct a sophisticated network.

It is an inexorable fact then that only a private network can afford the level of control and redundancy essential to meet the stringent prerequisites demanded by a nation’s mission critical services. Moreover, network ownership and/or self-licensing is perceived to be a more cost-effective option to access spectrum in preference to using systems from third-party spectrum owners who are generally only seeking an economic return.

Utility data requirements are an additional consideration; these are intrinsically different to public mobile data networks in that their requirements typically include the following:
• Data rates are lower than consumer data rates (typically 9.6Kbit/s rising to 2Mbit/s);
• Enhanced resilience to enable networks to operate in the absence of electrical mains power for extended periods;
• Geographic coverage must include less populated areas containing utility infrastructure; • Exacting availability, latency, jitter and synchronous requirements;
• Upload centric as opposed to public data networks being download centric;
• High levels of security to prevent malicious disruption of utility operations; and
• Longevity of product support in recognition of longer investment cycles.

It is important to note that the requirements for electricity utility communications are being fundamentally redefined by growing demand for energy and emerging Smart Grid technologies. Radio frequency spectrum remains a limited resource; hence, it has become essential to develop spectrum allocation policies to accommodate the following trends:
• Growing number of smart devices being installed at customer endpoints;
• Increasing occurrence of renewable energy sources feeding into the grid;
• Requirement for more granular information, e.g. more frequent and detailed meter sampling;
• Need for greater efficiencies regarding energy utilisation; and
• Desire for improved disaster management capability.

Although most utilities make extensive use of fixed line infrastructure in the form of transmission lines, fibre optic cables and copper cables,wireless communication remains a fundamental communications requirement for many compelling reasons. These include the following:
• Since radio systems are independent of physical grid infrastructure, telecom architecture can be designed to better accommodate communication needs;
• Radio systems are generally more resilient to weather related incidents, which can destroy physical infrastructure;
• Radio systems are quick to deploy; and assets, even those that are geographically widespread, can normally be swiftly accessed resulting in low MTTRs (mean time to repair);
• Mid-span breaks occurring on cables embedded within high voltage (HV) lines invariably require a line outage to repair, often leaving the telecom network in a compromised situation for extended periods;
• Operational mobile voice communications cannot be provided by any other means;
• Wireless systems are generally less susceptible than cables to theft and vandalism; and
• Many utilities already have significant investment in radio site infrastructure.

Radio frequency spectrum is an essential requirement to operate a private radio network. This is furthermore a scarce and finite resource in that more cannot be manufactured or expanded beyond what is already available. Hence, as future communications become more dependent upon wireless networks, commercial and private operators alike are endeavouring to acquire as much of this scarce resource as is possible.

A study by consultants in the UK involving a typical distribution company having four million customers, serving an area of 29,000km2 via a network of 80,000km of underground cables and 48,000km of overhead lines, shows a forecasted increase in connected points to grow by 775% by 2021 and 1,199% by 2031 when compared to 2011.
Spectrum pricing Regulators worldwide still predominantly employ administrative methods for determining radio spectrum fees. However, as spectrum management best practices migrate towards more liberalised market-based methods,spectrum auctions are becoming more commonplace; nevertheless, these have to date been restricted to Western Europe, the Americas, and South-East Asia and have also primarily been focussed upon cellular spectrum and some fixed and satellite-based telecoms services spectrum. It should be noted though that the relatively small amounts of spectrum required by utilities in noninternationally harmonised bands have, if auctioned at all, not attracted very high prices.

Developing countries in Africa, the Caribbean and Eastern Europe have been less inclined to use auctions to assign cellular spectrum and determine spectrum prices. The reasons for this are mainly attributable to a lack of spectrum scarcity and capacity within regulators.
The Independent Communications Authority of South Africa (ICASA) proposed changes to its spectrum fee regulations in 2009 and conducted extensive consultations, seeking input from various users and stakeholders throughout 2010. The new Radio Frequency Spectrum Licence Fee Regulations came into force in 2010 and are described as AIP (Administrative Incentive Pricing). As described in the regulations, AIP involves the use of a specific formula for the calculation of fees for radio communication services.
Annual spectrum fees are calculated using one of two formulae:

Point-to-point Formula
Applied to all fixed links below or above 1GHz up to 50GHz.
• Fee = (UNIT*BW*FREQ*CG*GEO*S HR*HOPMINI*UNIBI)

Point-to-multi-point Formula
Applied to all point-to-area services except for amateur, aeronautical and maritime with exclusive band allocations.
• Fee = (UNIT*BW*FREQ*CG*GEO*S HR*ASTER*UNIBI)

ICASA furthermore applies an automatic annual fee increase in accordance with the CPI (weighted average of the previous calendar year as published by Statistics South Africa).

In the interests of spectrum conservation and reducing the cost thereof, utilities should not be opposed to the adoption of a spectrum sharing policy. In general utilities do not have any substantive objections to spectrum sharing; however, considering that electricity is an essential resource for the delivery of almost all goods and services, it is paramount that any sharing of spectrum with other users does not impact utility operations.

The JRC (Joint Radio Company), a wholly owned joint venture between UK electricity and gas industries, has made some pertinent recommendations regarding spectrum sharing. These include the following:

• Assurance must be provided by the regulator that sensitive and confidential information will not be published
• Note must be taken that some seemingly underutilised channels may have been installed for emergency and resilience purposes
• Actual use may be appropriate for public sector spectrum, but not private sector spectrum
• The licensee should be permitted an option to decide whether, or not, to pursue sharing options

Furthermore, where teleprotection systems and SCADA operate continuously, sharing must be implemented on a geographic basis of separation between utility and other systems.

Unlicensed wireless devices operate in the ISM bands (i.e. those set aside for Industrial, Scientific or Medical applications). While these bands are exempt from spectrum licence fees and devices are typically cheap to purchase, several restrictions apply. These include a limitation of transmit power to <= 1 watt, must not cause harmful interference and be able to operate within an interfered environment. To achieve an acceptable signal to noise ratio a spread spectrum technique, e.g. frequency hopping, must be employed.

Three fundamental problems are apparent within this scenario:
1. Range limitations due to limited transmit power require the deployment on many intermediate nodes.
2. Since each hop is essentially another message, more bandwidth is consumed from a limited supply.
3. Additional processing required creates unacceptable levels of latency for real time communications.

Licensed wireless devices of course operate in a band designated by the Regulator and hence offer many advantages when compared to unlicensed devices. These include the following:
• Exclusive rights allow the licence holder to operate without interference or spectrum crowding concerns,
• Legal protection is provided by the Regulator,
• Dedicated, narrowband, single frequency systems generally offer excellent signal to noise ratios, and
• Much higher transmit powers permitted allow dramatic increases in hop lengths, consequently reducing the requirement for intermediate nodes.

Disadvantages involve limited available licensed spectrum, which can also often be difficult and expensive to obtain; nevertheless, considering enhanced resilience, lower latency and absence of interference only possible within licensed bands, this remains most definitely the preferred option for utility operational and business communications systems.

The modern trend toward the auction of radio frequency spectrum is an added concern for utilities as this has potential to increase the cost thereof and besides, most would find it difficult to participate in such an auction.

A migration toward Smart Grid technologies will also undoubtedly result in a dramatic increase in data that must be transported to and from many more widely distributed devices. And while the benefits of these new technologies, for utilities and customers alike, are indisputable, without sufficient regulated radio frequency spectrum at their disposal, utilities will simply not be able to ideally serve their customers in an efficient and cost-effective manner.

Hence, it is crucial that utilities clearly understand their future spectrum requirements and consequently develop policies to acquire the additional bandwidth required to match anticipated new technology deployments and growth requirements – together with an ability to effectively manage and contain the omnipresent risk of disaster (natural or manufactured) should any of these occur. ESI

This article was written and made available to ESI Africa for publication courtesy of our association partner, African Utilities Technology Council (AUTC), a non-profit trade association owned by utilities.

JRC response to a consultation on a framework for spectrum sharing 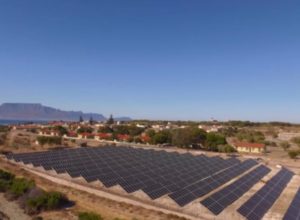 Behind the scenes: Robben Island’s solar