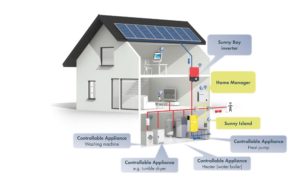 Be free from rising electricity prices and power outages
For years, South African companies and households have been battling sharp increases in electricity prices, their difficulties compounded by a lack of reliable supply resulting from the increasing energy demand versus supply.

Furthermore, according to the World Bank, electricity prices are currently much higher across Africa than in comparable developing regions such as South America or South-East Asia.

The harsh reality is that stateowned power companies have long failed to meet the increasing demand for electricity in many regions. In South Africa, scheduled and unscheduled power outages are part of everyday life. For most private households, this is annoying but not a matter of life and death. Commercial and industrial companies, on the other hand, can be particularly sensitive to the effects of an unreliable electricity supply. Some companies, retail entities and food chains are forced to close their doors during such times, resulting in a loss of income. Many companies have therefore installed diesel generators to stave off grid failures and the resultant production losses that occur in conjunction with them. Diesel generators can provide quick access to electricity in the event of grid failures, but bring about significant disadvantages in the form of the ongoing operating costs, lack of quality supply of electricity and high noise levels produced by the clattering diesel generators, which also impact on the quality of air and life.

Comparatively, solar PV systems are a relatively uncomplicated alternative. With daily solar irradiation of 4.5 to 6.5 kilowatt-hours (kWh) per square meter, South Africa has a precious commodity that should be utilised. PV systems produce electric current from the sun’s energy and are thus the ideal solution for households and commercial businesses with or without access to the national grid.

Solar energy produces electricity where and when needed
The costs of power generation using photovoltaics are dropping constantly thanks to technological advances. At the same time, the greater the solar irradiation, the more conventional power can be replaced by solar power, which in turn accelerates the pace at which investment in a PV system pays off. This is worthwhile in particular for households and small industrial, agricultural or businesses connected to the tourism industry. This solar self-consumption, which refers to this type of PV system, ensures reliable operations and enables greater independence from increasing electricity costs, unplanned power outage, and planned load shedding.

The words ‘back-up power’ and ‘off-grid electricity’ are on most minds these days. Whether it be for private households, manufacturing facilities, retail, farms, tourist destinations or office buildings, everyone is looking for…