In ESI Africa Issue 4-2014 Jeanie le Roux, Director of Operations at Treasure Karoo Action Group, was invited to share an Opinion Piece on shale gas (pages 50 & 51). In response to Ms Le Roux’s arguments, Prof Philip Lloyd of the Energy Institute at Cape Peninsula University of Technology says that there is ‘nothing to fear’.

The world was taken aback when oil prices fell dramatically early this year. We had grown used to oil at over US$100/barrel. To drop to about half was unprecedented. Many in the oil production business are desperately revising their budgets; the rest of us are starting to enjoy an improved cash flow. Of course, what happened was that the United States had started to produce oil and gas at an unforeseen rate.

Today it is producing nearly 10 million barrels of oil a day and Saudi Arabia is increasing its output in an attempt to put the US producers out of business and so drive a price increase. Today the US is producing nearly 70 billion cubic feet of natural gas, 40% more than it was a decade ago. Believers in peak oil/peak gas have turned far quieter. The change is the result of a huge technological shift. It has been found that the coal-black shales which underlie much of North America can be persuaded to yield oil and gas in economic quantities.

All that it takes is a long hole more or less horizontally through the shale, and a bit of pressure to hydraulically lift the strata above the hole. Imagine a flat book with a balloon between two pages. Blow up the balloon, and the pages will be forced apart. In the shale, the fractures stretching out from the hole provide the oil or gas with a short path to freedom, and it can flow at a far higher rate than it can from the unbroken rock. The shale is deep – typically about 2km deep – so it takes a high pressure to lift the rock. There is a fear that the high pressure will cause the hole to leak – but.. 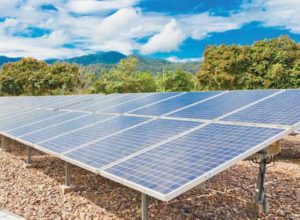