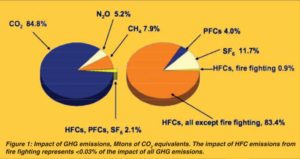 Venus, Earth and Mars form part of a Goldilocks zone, a distinguishing phenomenon based on location. Not too close to the Sun and therefore not too hot, and neither too far where freezing temperatures will stop life from forming.

Venus has an atmosphere that consists mostly of CO2, while Mars unfortunately lacks the CO2 concentration needed to trap the Sun’s heat. Earth has just the right amount of CO2, although these levels are rising due to carbon emissions.

Fire suppression systems whether chemical or inert have a negligible effect on climate change. For example, fluorinated fire suppression gases such as HFC227 have a global warming potential of 3,500 times that of a CO2 system. Since the market size of gases used in fire suppression applications make up less than 0.02% of all global warming gases, and considering that less than 1% is discharged, the impact is quite small. Refer to Figure 1.

EXPOSURE AND REACTION TO HF

Chemical gasses do not affect oxygen concentrations and absorb the heat element of fire. However by doing so the carbon molecule in the chemical bond breaks down and the fluorine component reacts with Hydrogen produced in the combustion process causing Hydrogen Fluoride (HF) and other noxious elements. The HF molecule is incomplete and will react like an acid, whereby breathing in HF will burn the lungs, nose… 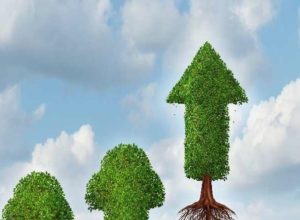