According to the University of Cape Town’s Energy Research Centre (UCT’s ERC), 79% of the agri-processing sector’s energy demand is for low temperature heat. As low temperature heat is provided most economically by solar thermal this represents a key opportunity. Work by GreenCape, in conjunction with Stellenbosch University’s Centre for Renewable and Sustainable Energy Studies (CRSES) and the World Wildlife Fund (WWF), estimates the potential for solar thermal energy within the agri-processing sector to be between 425,000m2 and 3,758,000m2 of collectors. This could result in savings of 111,000 to 943,000 tonnes of CO2e emissions per annum (a high variation due to different data sources). Solar thermal presents a key opportunity that can: reduce energy bills, ensure compliance with sustainability objectives and reduce companies’ carbon footprints. These benefits could be amplified, as the sector has been identified as one of national importance with policy support for the sector through the Agri-park programme and the Industrial Policy Action Plan.

For companies considering solar thermal energy for industrial processes, the following, based on the Southern African Solar Thermal Training & Demonstration Initiative’s (SOLTRAIN) course on Solar Heat in Industrial Processes, can assist in decision-making:

• The solar fraction (share of heat provided by solar energy) of systems in South Africa is generally in the range of 60-80%. This can be used to estimate the cost savings of the system, which, once paid off, can continue to provide free energy. In general, solar thermal systems supplement traditional fuel sources and do not completely replace them.

• As a first pass, a system efficiency of 50% can be assumed, i.e. about half of the solar energy that reaches the surface will be turned into useful heat. This, in conjunction with a free solar map (such as from Solar GIS) will provide a rough estimate of the energy that can be generated for a specific site and the size of the solar thermal system needed.

• While the costs of solar thermal systems still vary greatly, a study of 89 systems found an average cost of €603 ($647)/m2. When considering the business case for substituting different fuels, this results in a reasonable business case when replacing all fuels, except possibly coal, as shown in Figure 3. The payback is typically less than 10 years, with an expected lifespan of 20 years: this amounts to 10 years of free energy. Cognisance of differing applications is taken into account with the error bars; thus when replacing electricity and assuming no electricity cost increase the payback period could be as low as four years. Payback periods of less than three years are possible for some instances when replacing diesel, petrol and LPG – again assuming no fuel cost increases.

There are a number of barriers to the development of this market that will need to be addressed. These are briefly discussed below.

Perception as a ‘new technology’. While the technology is considered new and untested, the database for applications of solar heat integration in industrial processes references systems that were installed more than 35 years ago. South Africa also has a number of industries that have already identified solar thermal as a significant opportunity, as illustrated in the Table below. 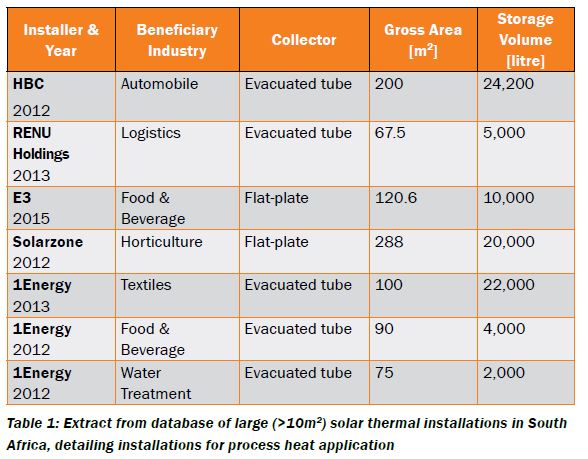 The government’s policy of systems, rather than component testing. As only systems (not individual components) are locally (SABS) certified, the local industry is not able to focus on the manufacture of specific components in a solar thermal system. This limits competition and the growth of the sector.

The high capital cost of systems need not be a hindrance, as innovative service models, such as energy service companies (ESCOs), are helping to cover the capital costs. Instead of selling the technology to companies, ESCOs remove the capital cost burden and sell the energy or energy savings to their clients.

The recently launched ESCO register created by the South African National Energy Development Institute has also made it easier to find ESCOs. Additional support is also available from SOLTRAIN in the form of free training, knowledge and financial support for installations that can serve as demonstration sites. With its applicability to agri-processing, solar thermal presents a significant opportunity in a sector set to grow rapidly. ESI

Pieter Janse van Vuuren, who holds a Master’s degree in Economics from Stellenbosch, has over three years’ experience as economic analyst at GreenCape, working primarily on greening food value chains.

Asanda Austin Jezile has a National Diploma in Journalism and a BTech in Public Relations Management, both from the Cape Peninsula University of Technology. He is currently working as a Communications and Events Officer for GreenCape.