In a country that is notorious for low access to electricity in the East African region, could a strategic renewable energy skills development programme put Somalia on the map amongst its neighbouring countries who have made a name for themselves in this developing sector? Babalwa Bungane draws attention to the key findings of the analysis titled Scoping study for a renewable energy skills development Public Private Development Partnership (PPDP) in Somalia, which documents how the country can harness these resources.

In efforts to understand why electricity access is very low at household level in Somalia, with the latest estimates by the AfDB (2015) sitting at 16%, the International Labour Organisation partnered with the Swedish International Development Agency to embark on a survey to understand the related issues. The final report was concluded in late 2016.

With the important role that the private sector and the government can play in Somalia’s power sector, a PPDP is envisaged that could address the provision of technical skills training. In order for the design of the programme to be effective when deployed, the authors of the study engaged with the stakeholders to provide guidance on mapping the initiative.

Suggested approaches to mapping the initiative and successfully implementing it include:

3. The importance of gender balance and the possibility of replicating the PPDP elsewhere.

At $1.2/kWh, average retail electricity prices for Somali households are eight times higher than the regional average and among the highest globally. Most power in the country is supplied by expensive diesel generators; however, there is interest in exploring alternative renewable energy technologies particularly solar photovoltaics (PV) to displace at least part of the diesel generation. The limitation with this ambitious plan is Somalia’s lack of important technical skills to enable the deployment of renewable energy.

The analysis also found that electricity access varies greatly across cities and regions. With 80% of households connected in Hargeisa, in contrast to about two-thirds in Mogadishu. With that said, 95% of the poorest households across Somalia are said to have no access at all. Expanding electricity access can have substantial benefits for the local population. Cheaper and cleaner alternatives exist but a lack of skilled labour has been highlighted as a key challenge facing IPPs and project developers in further expanding power supply to include renewable energy sources.

Narrowing this skills gap has the potential to create green jobs, which could support the expansion of the renewable energy sector, lower energy prices and ultimately boost economic growth.

During stakeholder engagements, various reasons were listed as to why solar PV is the preferred option over wind turbines in expediting the up-take of renewables. Wind power is considered too challenging to develop in the current environment, with more complex technical skills sets required, longer lead times compared to solar PV projects and higher maintenance costs.

According to the Somalia’s intended nationally determined contributions (INDCs), issued by the State Minister for Environment, the four 50kW turbines that were installed in Mogadishu in 1988 are no longer operating due to aging. Onshore and offshore wind turbines are also typically the size of several MWs, which are considered too large for Somalia’s current demand situation of a few hundred watts per connection and limited industrial demand.

Among the reasons given which favour the deployment of solar system at household level were that solar lighting products can be deployed at small and micro scales and are less technically complex than larger systems of several kW and therefore require less technical skills training. With solar PV only producing electricity in daylight, diesel generators will continue to be required to supply power at night. Another interesting view was the suggestion of biomass-fired boiler technology, which is slated to provide this kind of base-load capacity.

Given the challenges around access to finance for consumers, the study recommended that innovative payment systems needed to be put in place to enable deployment of power systems, especially in rural areas. As such, it was suggested that additional technology focus should therefore be placed on:

• Metering and telecoms and communications technology for systems that are being sold as payasyou-go systems and are grid-tied;

• Back-up generation for solar PV, in the form of a diesel generator or a battery, to provide power at night time; and

• Network development and wiring with due attention to health and safety standards in the installation and operations and maintenance process.

Although Somalia developed an energy policy in 2010, the report found that the country as a whole or within regions is mostly lacking a policy or regulatory framework. To overcome this predicament, the stakeholders recommended that the private sector play a leading role in driving a bottomup approach to policy and regulatory design. The proposed PPDP is regarded as a forum that could drive this process.

The bottom-up approach is also envisioned to drive the necessary skills development not just ‘on-theground’ but also engaging in a wider policy development dialogue with government and providing skilled and knowledgeable experts for this process. Some of the necessary frameworks could be developed to support renewable energy deployment. Stakeholders also advocated for a training facility that could consider the training of future policy makers, not only technicians. Scholarships for postgraduate studies abroad could help remedy this issue, some of the stakeholders suggested.

Among the regulatory measures most relevant to the proposed training PPDP, a certification mechanism for technical skills is a top priority. In the absence of a regulatory framework, and in line with the above-mentioned bottom-up approach, this study recommends that the PPDP should develop its own certification mechanism or work with partners from universities, to agree on a common framework.

Somali universities are organised within the Association of Somali Universities, which is self-regulated with government endorsement. In this instance, a reference case study is Strathmore University’s successful training programme at the Strathmore Energy Research Centre (SERC) in Nairobi, which was strongly driven by Kenya’s newly established certification requirements for technicians (refer info box). 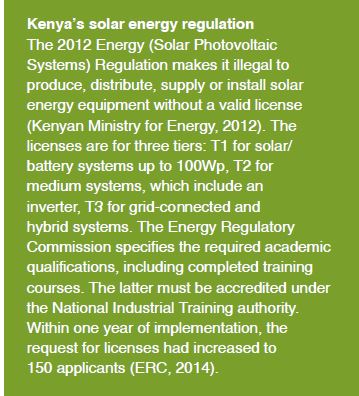 To follow in Kenya’s footsteps, SERC can be approached to support Somalia’s facility for curriculum design, and more complex training components around gridtied systems. Other suggested sources for information on a certification scheme included the Electronics Technicians Association International, as well as NABCEP, the North American Board of Energy Practitioners, and the Clean Energy Council in Australia.

Training will cover the value chain for off-grid systems, such as:

• Planning and design for grid systems

The proposed skills development centre should aim to be not only an educational facility but also to develop a vision to ensure that Somalia marks its position robustly on the East African map by maximising the benefits of renewable energy technologies to power its population. ESI