According to research, 2.1 billion people live without safe water at home. This year the theme of “Leaving no one behind” aptly revisits access to water as a critical human right and places emphasis on previously marginalised groups gain access to safe water and water services.

In South Africa, while at least 21 million people have benefitted from a basic supply of water since 1994 there are still vast areas outside of major cities or towns that are underdeveloped and have limited access to safe water and formal water services. In fact, the All Town Studies of 905 towns – which excluded metros and large cities – found that 28% have inadequate water resources.

Karen King, senior associate at WSP for environment & energy in Africa, says: “Though government has committed to water projects and infrastructure in the 2019 Budget, challenges to expanding water service infrastructure are further compounded by nuances and complexities in financial and environmental planning to meet the needs of rapid population growth, urbanisation and industrialisation across the country.”

While South Africa has some of the most sophisticated water infrastructure networks on the continent, there are still several rural areas or areas on the outskirts of major cities or towns that don’t have access to water services. Added to this, much of the existing infrastructure was established over a number of decades ago and – whether due to availability of funding or capacity – it hasn’t been maintained to standards that would ensure maximum efficiencies.

As things stand, demand for water services is outstripping the pace of infrastructure maintenance and development – and its reported that up to 35% of the country’s safe drinking water is lost due to leakages in the infrastructure networks and at properties. Read more: World Water Day on 22 March: “Leaving no one behind”﻿

“Adding to the pressures; South Africa generally receives a little more than half of the world’s average rainfall per year, however, among warmer temperatures and extreme weather conditions, there have also been sporadic seasonal changes to rainfall patterns across the country,” says King.

She adds: “Collectively, this has resulted in less rainfall where we really need it, to replenish our dams and ground water resources. So, while we can’t control the weather; without serious intervention to improve how we measure, monitor, management and even restrict use of available water resources, the situation will only worsen.”

Supply and demand of water

Current projections forecast that without serious intervention we could face a 17% gap between supply and demand by 2030. This will have a significant influence on the country’s future economic and social sustainability.

Riaan Graham, sales director for Ruckus Networks, sub-Saharan Africa, agrees and alludes to a quote from Thomas Fuller; ‘We never know the worth of water ‘til the well runs dry.’

“Much like the energy crisis that nearly collapsed the economy in 2014, similar consequences may occur should government not act immediately with the country’s water crisis. If we just look at the water crisis and restrictions the Western Cape has been faced with this blankly demonstrates that water is not a renewable resource, but rather is one that needs to be safeguarded,” underlines Graham.

He suggests that there is a myriad of alternative solutions that need to be considered, including the use of technology to better manage the situation and put preventative measures in place to ensure other regions don’t fall into the same pattern. “In fact, technology such as IoT can be a part of the solution – they are readily available and enabled through Wi-Fi – where they can be used to apply water management systems, including monitoring use, pinpointing leaks and curbing excessive use, for example.

“Additionally, sensor technology can go a long way in embracing intelligent irrigation and usage, to connecting and optimising to conserve. These in effect are solutions that are currently available and much needed country-wide to ensure responsible usage and towards zero wastage – a concept very much in line with smart cities thinking and one we should be moving towards,” states Graham.

Graham continues: “There is no instant quick fix – but what does need to change, and change quickly, is acceptance of change. We cannot continue to overlook the importance of water and the role it has to play in continued development and thereby assisting to eradicate poverty in South Africa.

He highlights that water is life, adding that “we therefore need to be implementing solutions and utilising the infrastructure we have (such as Wi-Fi) that promote the sustainable management of this scarce resource, as water is key to our future prosperity. Only by acting together, can we achieve a water wise country,” says Graham.

According to King, succeeding in water conservation and management will take input from society, the private sector and the public sector.

“Water is only growing as a key risk area within South Africa – driven both by local development issues and well increased rapid investment and development growth across certain regions,” states King.

She says even though there is acceptance in the market that climate change is increasingly unpredictable and there is a willingness to look at sustainability risks more broadly – including water – more consideration must be given to “how we preserve water resources today and for future generations. We must prepare today for how we manage water in the future”. 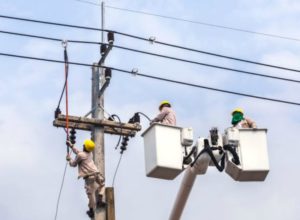 Op-Ed: Electricity is an essential service during COVID-19 crisis