A recent study, released by Frost & Sullivan, reveals that the African desalination market is now stabilising and investment in desalination is gaining traction.

The study found that the desalination market in Africa has recovered from the global economic downturn in 2015-2017, which resulted in low desalination investment across the continent.

Frost & Sullivan’s findings revealed that by 2030, 35% of the world will be living in water-stressed countries and although many efforts are being made to diversify water resources. Laura Caetano, industry analyst at Frost & Sullivan, believes the African desalination market will grow at a compound annual growth rate (CAGR) of 10.7% from 2017 to 2022.

“Of the 54 countries in Africa, 39 have a coastline, making desalination the logical solution, but the high cost of CAPEX and OPEX prove to be a major restraint to the development of the desalination market in Africa,” said Caetano.

Desalination is an energy intensive technology

In recent years, the application of MSF and MED have declined significantly due to their high energy requirements, and the use of electrodialysis and nanofiltration has seen a slight increase.

RO will remain the dominant technology.

Frost & Sullivan notes an increasing interaction between the private and public sectors when it comes to infrastructure development, resulting in a growing number of public-private partnerships (PPPs) to fund desalination projects going forward.

Caetano notes that high population growth, prolonged drought conditions across Africa, old and inefficient water infrastructure and increasing PPPs are the major driving forces behind the growth of the desalination market.

Mitigating measures through the use of renewable energy to power plants and the installation of energy devices ( ERDs) are growing in popularity and significantly reducing the high OPEX costs associated with desalination, making it an increasingly realistic option for sub-Saharan Africa. 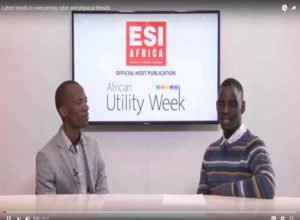 Utilities and cybersecurity focus in Africa