A next-generation architectural approach, which was outlined in part one of this series, is required to accommodate the increased complexities associated with the changing grid. In this instalment, grid architecture is examined as an intended aid to managing the complexity of the grid modernisation process.

Initially, distribution grids were designed based purely on one-way transmission of power from central power stations through distribution level networks to customers. This grid setup must now revolutionise itself to safely and reliably include new energy resources and operational priorities.

Application of grid architecture techniques should be an early step in a grid modernisation planning process through which utilities can gain valuable insight into the impact of change on the core network of structures that make up a modern grid. These structures interact with each other and impose essential limits on the adaptability, performance and scalability of a grid as it evolves into the future.

The US Department of Energy’s Grid Modernisation Initiative is motivated by the need to transform “today’s legacy grid” into one meeting the needs of the 21st century. The Initiative has identified five key trends driving this transformation:

These trends lead to increased complexity that can be effectively managed through the application of grid architecture. A modernised grid comprises a network of seven key structures that interact and work together to provide electrical energy. These structures form the grid’s skeleton and directly impact how well the grid can adapt and evolve into the future.

Each structure can be highly complex, but as a network of interrelated structures, the complexity grows exponentially to become an ultra-large-scale complex system characterised by wide timescales and geographic distribution with elements that are heterogeneous, inconsistent and constantly changing. Failures are ‘normal’, evolution and deployment are continuous, and diverse requirements are inherently conflicting.

Why do we care about structure?

Structure sets the essential limits for what a system can do and cannot do. An example of a network of structures is a typical building, which is comprised of several structures that need to work together to achieve their intended purpose. These include the visible exterior, interior rooms, electrical and plumbing systems, HVAC, and security and automation systems. They are interrelated and need to work together for the building to function as planned.

A grid architect uses a set of tools and techniques to aid in getting these critical grid structures ‘right’. The structures form the core of the grid system and must last for many decades. Structure that is well thought out creates intrinsic grid characteristics that support successful grid modernisation and helps safeguard and future-proof technological investments by limiting the impact of change and reducing integration costs.

Structure provides the context so that the design engineering of subsystems and components can proceed while being confident that unintended consequences can be avoided, or at least minimised. Lacking a carefully thought-out grid architecture, system integration becomes costly and stranded assets increase.

It is not just important, but crucial, that the structural issues addressed by grid architecture be considered early in the grid modernisation programme.

Getting the structure right: The architecture development process

• Constraints associated with legacy, regulatory, financial and other systems.

• End State Model, which documents emerging trends and desired-state reference models along with use case scenarios that need to be supported by the grid architecture.

Note that as a result of modern grid ultra-largescale complexity and the indeterminate nature of grid evolution, it is not possible to define a comprehensive set of use cases that encapsulate the design of the future grid. Even if it could, the future grid must be able to accommodate all the use cases that emerge over time with the least amount of effort in terms of time and money. For this reason, use cases are used as inputs for helping define the end state model and for validating the grid architecture that emerges from the development process, whereas the development of the architecture specification is driven mainly by the emerging systemic issues.

The architecture development process involves a set of rigorous methodologies and techniques from the practice of systems architecture combined with elements of network theory, optimisation theory, and control engineering applied specifically to the grid as an ultra-large-scale complex system.

This process relies on applying math-based techniques to evaluating structures, which ensures that architectures are not ad hoc and can be compared analytically. Some of the advanced techniques used include:

• Comparative Analysis of Architectures – use of mathematical methods to determine architecture goodness of fit, relative merit, and value of individual elements.

The coordination framework is a key grid structure that ties together all the parts and pieces related to the other structures and enables them to function as an integrated system. It is composed of sets of relationships, processes and flows that enable the components of the grid to operate as a cooperative whole. It includes dispatch and scheduling, supervisory and regulatory closed loop control, certain notices and indications from one organisation to another, and signalling to effect cooperation including transactive signals.

Legacy centralised coordination frameworks focused on bulk resources are evolving with the rapid growth of distributed energy resources (DER) toward a more distributed topology. As we move toward “renewables everywhere”, how will the diverse and variable distributed resources work together effectively to maintain grid integrity and resilience while providing an evolutionary path from centralised systems to hybrid central/distributed systems that will enable utilities to adapt to an increasingly complex and dynamic grid?

An important and rigorous example is the framework for coordinating distributed energy resources developed by DOE’s Grid Modernization Laboratory Consortium (GMLC) programme. Coordinating high-penetration distributed energy resources is a challenging problem as some of the resources are not owned by utilities and some are managed by third-parties. Utilities currently face problems in managing third-party DER resources due to the lack of a hierarchical approach that results in the lack of necessary observability and controllability of these third-party systems.

Grid architecture addresses this using a branch of optimsation theory to develop a layered hierarchical decomposition approach called laminar coordination that: 1) is sufficiently flexible, 2) can be mapped to the structure of the grid, 3) can integrate third-party systems, 4) respects organisational boundaries, and 5) is able to support both centralised and distributed implementations. The laminar coordination framework is described in PNNL 2016 paper The Architectural Basis for Highly Distributed Transactive Power Grids.

Another important layering mechanism for structuring future-proofed investment in grid technology is to leverage ‘grid platforms’. Platforms are widely used in software systems (e.g. smartphones) to decouple foundational or core services from edge applications. Core services are those services that are useful to many applications and that change relatively slowly.

Edge applications are dynamic and diverse. Applications integrate with the core capabilities through well-defined, interoperable service interfaces. The value of a platform arises from the creation of a unified system from a set of disparate resources while spreading the platform costs across those resources. Grid platforms are similar to software platforms, but they include the infrastructure of the grid. This has implications, for example, of how communication systems for distribution grids would be developed and operated.

The primary purpose of architecture artefacts is to communicate with a wide variety of internal and external stakeholders. For this reason, documents are designed to be easily readable and understandable using widely-available desktop tools. Documents created during the architecture development process include specifications, diagrams, simulations, models, reports, presentations, and validation studies and analysis.

By viewing the grid as a network of structures and dealing with all the structures simultaneously, it becomes easier to understand the strengths and constraints of inherent legacy structure and to determine the appropriate structure, or minimal required changes to the existing structure, necessary to relieve those constraints and enable new capabilities.

At the same time, by looking at structure first, we can strengthen desirable grid characteristics and simplify downstream design and implementation decisions because we’re able to avoid structural constraints that would cause complications later. This benefits system designers and engineers as they can develop their subsystems confident that hidden constraints in the structure will not make it difficult to carry out their implementations and realise the benefits.

This article is co-authored by Jeffrey Taft, chief architect for electric grid transformation at the Pacific Northwest National Laboratory, US; Ronald Melton, the team lead for Electricity Infrastructure Integration at Pacific Northwest National Laboratory (PNNL), US; and Dave Hardin, chief architect emeritus for the Smart Electric Power Alliance, US. This is an edited version of the article, which was originally published by our sister publication, POWERGRID International. www.power-grid.com 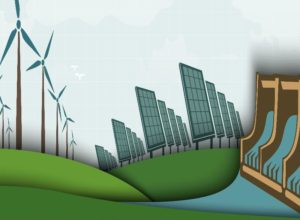