When 59 rural villages in Tanzania were connected to the grid, Energy 4 Impact ran a parallel pilot project to promote the benefits of electrification to local businesses. Two years later, the organisation shares insights about the economic and social impact of stimulating energy demand in newly electrified villages.

In 2017, 59 rural villages in Eastern Tanzania were connected to the national electricity grid through the Rural Electrification Densification Programme (REDP). For the first time, people had access to electricity to light their homes and power domestic appliances.

While the network expansion was underway, Energy 4 Impact, with the financial support of The Royal Norwegian Embassy in Tanzania, ran a parallel pilot project to promote the benefits of electrification to businesses: agro-processors, wood mills, carpenters, retailers, hair salons and restaurants.

The pilot project focussed on stimulating productive use of electricity (PUE) by strengthening local entrepreneurs’ ability to harness the benefits of electricity. It also helped them access finance to invest in electrical equipment and appliances. At the end of the 15-month pilot, the supported businesses had experienced significant profit growth and new permanent jobs were created. The organisation continued to monitor the sustainability of the business. Here are the findings.

Embedded in the Tanzanian Rural Energy Agency (REA) grid-expansion programme (the REDP), and run in partnership with engineering and design company Multiconsult from December 2017 until March 2019, the PUE pilot targeted entrepreneurs in 59 villages in Tanga and Pwani through a four-pronged approach.

Firstly, the pilot raised awareness among local entrepreneurs of the opportunities that electricity provides. Through roadshows and mobile clinics, the use of common electrical appliances such as fridges, hairdryers, food fryers and printers was demonstrated to over 4,200 people. The shows emphasised how appliances could improve productivity, provide business opportunities, and where and how they could be acquired.

Secondly, 349 interested and qualified entrepreneurs were selected to participate in the project. They received support to sharpen their business and financial management skills, to develop their business cases, to market their products and to keep financial records.

Thirdly, those entrepreneurs who decided to connect to the electricity grid received help to select the best equipment for their needs and to get loans to buy the electric equipment.

Lastly, the entrepreneurs received training to understand the installation, handling and operations of the machines. Meanwhile, gender-sensitive strategies were adopted to foster the participation of women in the project.

These strategies contributed to increasing the average profit of the entrepreneurs by 183%; creating 523 permanent jobs; increasing the average monthly electricity consumption by 88%; and securing 155 formal loans to purchase 377 appliances. In addition, partnerships were created with microfinance institutions, suppliers and engineering companies, which are key partners to support business expansion.

Following the end of the support and networking activities, Energy 4 Impact monitored the impact and sustainability of its approach for nine months, from April to December 2019.

“Through continued monitoring, we assessed if the businesses were sustainable, whether they continued to grow, consume electricity, repay or take up new loans and purchase appliances. The mentoring activities had stopped during this time, so what we observed were results achieved independently of the direct project interventions,” explains Fredrick Tunutu, Project Manager at Energy 4 Impact.

The findings highlight that, in most cases, the new knowledge, skills and access to local networks enabled the entrepreneurs to successfully sustain and develop their businesses.

Businesses’ profitability increased by 142% during the monitoring phase. Spending also continued to rise through the nine months, showing how the entrepreneurs’ business confidence increased.

Employment also continued to rise, with 214 new jobs created (up by 144%) over the same nine-month period. In total, the 15-month pilot facilitated the creation of 551 new jobs. “Job creation was one of the big success stories throughout the pilot,” says Tunutu. “At the start of the programme, there were only 98 permanent jobs among the participating businesses. It increased by an astounding 769%.” Of the 551 new jobs, 523 were permanent meaning 523 additional households with a reliable income. Female employment also experienced a significant increase, with their share of the jobs going from 31% at the start of the programme to 47% in December 2019.

Electricity consumption went up by 23% in the monitoring period alone, from 92kWh to 113kWh. A total of 34 new loans were issued during the monitoring phase, valued between $500 and $2,000. Half of the loan was dedicated to working capital requirements, the other half to support appliance purchases. All entrepreneurs were also on schedule with their repayments and not a single case of delays or defaults had been reported.

“By securing loans, business owners were also able to build a credit track record. This will enable them to access new loans from different financial institutions, as and when their business needs,” says Tunutu. The proportion of female entrepreneurs taking loans also increased by 18% during the monitoring phase, jumping from 46% to 64%. The pilot’s gender inclusion strategies have proved to be effective in enabling women’s equal participation in the local markets and in securing more loans.

These results not only demonstrated the lasting positive economic and social impact of stimulating energy demand in newly electrified villages, but they also highlighted the sustainability of an approach that is engrained in the market dynamics of local businesses and its potential to be replicated in other areas.

Tunutu emphasised the value of implementing PUE activities alongside the national grid expansion, as well as in areas which are already connected to the grid: “PUE stimulation activities should also be considered in areas that have long been electrified but the economic benefits of electrification have not yet been realised. These are areas with highly untapped potential for processing industries and PUE fostering the uptake of productive use of energy will complement the country’s industrialisation drive.”

Welcoming the results of successful collaboration, Børge Romsloe, Energy Counsellor at the Royal Norwegian in Dar es Salaam, says: “The programme has showcased how targeted activities to stimulate productive use of electricity can unlock local business potential and create economic growth. We have documented several important lessons that could inform the design and implementation of future interventions, and we are certain that future PUE programmes can deliver even stronger results.”

Which lessons can be learned?

While the positive results support the expansion of the programme into other areas, key learnings should be considered alongside potential tweaks when replicating the project:

• Although new partnerships with financial institutions and technology suppliers were successful, there is a need to develop loan guarantee facilities for larger investment capital and to increase the lenders’ appetite to lend to local businesses, which are often perceived as high risk.

• It pays off to focus on areas with high potential for productive use of energy activities such as manufacturing, agriculture and agro-processing.

• Local governments should be involved in promoting the productive use of electricity, since they have already been effective in creating awareness on community matters such as education and health. Future projects should work more closely with them when conducting PUE awareness campaigns and facilitating access to finance.

• The project has also drawn interesting lessons from the gender equality and inclusion strategies. It has confirmed that female entrepreneurs can be as successful as their male counterparts when given the opportunity, the requisite tools, and relevant skills.

A successful pilot means the programme can be implemented again to support other villages and businesses. The learnings and recommendations can ensure the next iteration yields even greater results. As the network grid continues to expand, so too can the PUE activities to drive economic growth and women empowerment. ESI 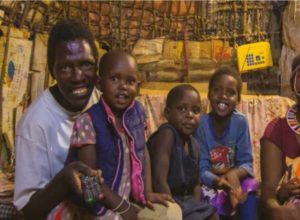