As we all know that climate change is one of the most significant challenges that we are facing in this century. It is affecting human life, animals, and the environment to a larger extent.

By George Stacey, an environmentalist at Norvergence

Vietnam, known for its beaches, rivers, and bustling cities, is considered among countries that are significantly impacted by global climate change. When it comes to geography and demography of Vietnam, the country has a total land area of 329,569 square kilometers and a population of over 92 million. With a national average of 232 people/km2, Vietnam has the highest population density in Southeast Asia after Singapore.

The number of cold fronts has decreased over the span of the last 20 years but at the same time, anomalous events have occurred more frequently. High-intensity Typhoons tend to occur more frequently as the mean sea level rose at a rate of 3 mm per year. Above is an overall image of climate change in Vietnam. Below we will discuss constraints such as temperature, sea-level rise, and rainfall in more detail.

By 2050, climate zones of the south-central coast will experience an increase in temperature of around 1 degree Celsius.

On the other hand, annual mean temperatures for northern climate zones will increase by 1.3 degree Celsius.

There is no doubt that climate change has affected a lot of nature/environment cycles in Vietnam. Norvergence with the help of the United Nations Framework Convention on Climate Change has predicted some possible effects of climate change as discussed below:

Groundwater levels throughout the country are expected to get lower from the normal range. Inter- and intra-seasonal rainfall, drought, and dry season will be seen more significantly.

Chances of flooding could rise as there will be more incidence of extreme rainfall and soil fertility also decreases.

Poverty status, social security, and access to resources; these are the three main factors that are extremely affected by global climate change.

Socially vulnerable groups in Vietnam such as ethnic minorities, women, and the disabled are less likely to be able to adapt to climate change.  Also, people who have a direct reliance on natural resources are exposed to greater risk.

When compared with the 20th century, water demand for agriculture will increase almost two or three fold. The annual temperature is also expected to rise by almost 10 percent by 2100.

Shifts in eco-agricultural zones will be recorded that leads to loss of varieties of indigenous breeds or species. Evapotranspiration rates will increase and productivity decreases in the Mekong River Delta and Central Coast.

According to intensive research done by the team of Norvergence, a 1-meter rise of sea level could submerge around 10,000 km of road infrastructure.

Moreover; transmission lines, equipment, industries, and many power stations will be washed out because of flooding.

Loss of habitat because of flooding will cause a reduction in stokes of mollusks, fish, and crustaceans. The inclusion of saltwater into freshwater estuaries and coastal lagoons will impact the aquaculture sub-sector.

The future of freshwater catfish farming is in dilemma and also some fish species will get more prone to deadly diseases.

Rising sea level and temperature will affect agricultural land that leads to the risk of food shortage. Also, direct health impacts occur because of heat waves and naturals disasters.

On estimation, there will be an overall loss of GDP (around 1.0 to 1.5 percent). Agricultural sector loss would be in between 5% to 10%. When it comes to regional GDP of Vietnam, a loss of around 4 % will be registered.

Consequences of climate change in Vietnam are very serious and it presents significant threats to the country’s future. All the constraints i.e poverty reduction, hunger eradication, sustainable development, and the millennium development goals will be hugely affected due to the global climate change.

There is no doubt that the government of Vietnam has done many applaud able works to address climate change challenges. The National Target Program is considered one of the finest responses to climate change as it develops activities to tackle global warming and other environmental issues.

Despite achieving remarkable progress since the renovation (Doi Moi), Vietnam is still far behind from its industrialization’s and modernization’s goals as its economy totally depends upon the agriculture sector.

Because of the importance of agriculture and rural area, Vietnam’s government launched Nation Target Programme on New Rural Development or the National Target Program on Climate Change in the year 2009. The objective of the program is to increase investments in the agriculture sector that leads to more production.

The idea is to completely optimize the whole food chain network so that it not only improves the economy but also combat climate change.

The effect of global warming has already started to impact Vietnam. Not only it, but almost every country is facing such issues related to climate change.

Overall, the problem like climate change cannot be solved without the help of individuals. We all have to realise our responsibility and adopt green measures. 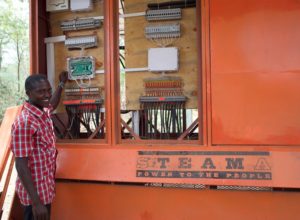 Standardisation in the Microgrid Industry – Together We Are Stronger