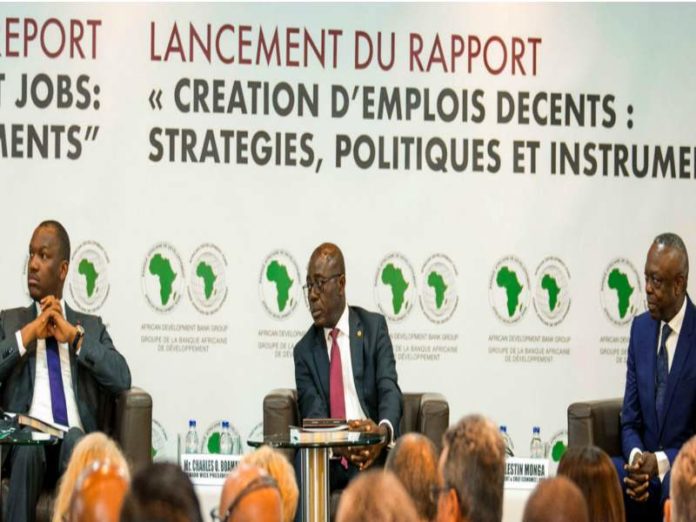 The Bank said in a statement that the report elicited strong presentations and a lively debate, which took place in the Babacar N’Diaye Auditorium at the Bank’s headquarters, attended by senior management, diplomats, staff, and media representatives.

The Bank’s Senior Vice President Charles Boamah introduced the issue of employment as being “at the top of the agenda of every African leader”, and said that the report was “the first of its kind in challenging and unveiling some of the misconceptions that many experts have about the nature of under-employment and unemployment in Africa.

“The report signals the start of some fresh thinking about the nature of employment creation on the continent and clarifies which development strategies and policy interventions are needed for low-income countries in Africa”, Boamah said.

Boamah went on to predict that the report would “serve as a reference document on employment in Africa for some years to come”.

Introducing the report, Celestin Monga, the Bank’s Chief Economist, remarked that part of its appeal was in applying innovative thinking to conventional employment issues. For example, one problem identified was that domestic economic progress was often assessed by the allocation of public funding to priority sectors or by analysing the number of reforms carried out to improve the business environment. In this context, he observed that several of the world’s top-performing countries had low rankings for the ease of doing business.

Monga added that the official unemployment figures of many African countries were so unrealistically low that policymakers found it difficult to explain how demand for labour in markets was so buoyant. Africa was also the world region with the highest proportion of its workforce in vulnerable employment, which served to hide rather than clarify the essential issue of employment in Africa. A new model for measuring employment that related to actual conditions in Africa was needed, he said. The report should also be seen as a manifesto for African jobs.

In the face of rapidly growing populations and heightened risks of social unrest or discontent, jobless growth was the most serious concern for African policymakers, said Abebe Shimeles, manager in the Chief Economist’s complex, who spoke on the highlights of the report. “One problem”, he added, “was already well known – that employment and unemployment needed to be more closely defined in their relative context, a task that had already caused difficulties in other development finance institutions.

Traditional labour market economists were not capable of accurately defining the particular African employment phenomenon”. In addition, he pointed out that the status of the ministries of work or labour in many African countries was often not important enough to be considered as a critical policy sector, reflecting the low priority given to making a serious difference to the continental employment challenge facing all the African countries.