These wind energy project milestones are the inauguration of its flagship Parc Eolien Taiba N’Diaye (PETN) project in Senegal, which provides the first-ever utility-scale wind power in West Africa; and the ground-breaking on the 250MW West Bakr Wind project in Egypt.

The inauguration of PETN marks the official opening of a wind farm that will provide power for over 2 million people.

Once fully complete later this year, PETN will provide a 15% uplift to Senegal’s generation capacity. The project will generate electricity for Senegal for two decades.

While in Egypt, ground-breaking on the 250MW West Bakr Wind project marks the start of construction for the project.

It will provide an additional 250MW of clean energy to the grid, increasing Egypt’s wind energy capacity as the country strives to meet its target of generating 20% of its electricity from renewable sources by 2022.

The project will prevent more than 550,000 tonnes of carbon dioxide emissions per year.

Both West Bakr Wind and PETN are deploying 20-year community investment plans in their local areas.

These are designed to address pressing socio-economic development challenges and ensure sustained improvements for communities, even after the end of wind farm operations in the future.

At West Bakr Wind, for example, migrating birds will be protected through the development of a “shut down on demand” programme.

At PETN, two new marketplaces have been constructed and a new IT centre has been built for local schoolchildren. The plan of socio-economic investments at PETN is estimated to contribute up to $20 million over the lifetime of the wind farm.

Chris Antonopoulos, Chief Executive Officer at Lekela, said: “We have been working towards this day for several years now. It’s a big moment for Lekela and proof that clean energy can be built right across the African continent, quickly and cheaply. In just four years, we have become one of the largest pure renewable energy providers on the continent, with over 1,000MW now in construction or operation.

“To be able to open the first-ever large-scale wind farm in West Africa is a historic moment for Senegal. This clean, cheap source of energy will be used by millions of people and hopefully sets a template for other countries to follow.

“We are also thrilled to begin construction at West Bakr which marks our first project with the Egyptian Government. We look forward to opening this project in less than two years’ time and working with the Government on more opportunities in the future.”

PETN was officially inaugurated this week by the President of Senegal, Macky Sall. Also attending the ceremony were Minister of Petroleum and Energy, Mouhamadou Makhtar Cissé; Her Excellency Tulinabo S. Mushingi and Her Excellency Victoria Billing, ambassadors for the USA and UK respectively; Papa Mademba Biteye, CEO of Senelec, and a delegation from the World Bank. 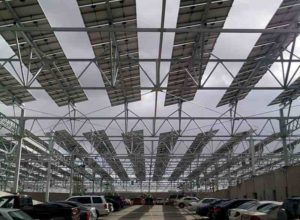 Jordan, soon to house one of the largest solar PV carparks