Imperial Wanderers Stadium is embracing the clean power trends by going green. The stadium partnered with Imperial and the SolarSaver Group for the installation of a customised 250kWp solar PV system.

Central Gauteng Lions underlined that the venue is one of the first stadiums in South Africa to ‘go green’.

Central Gauteng Lions is the custodian of all cricket activities in the greater Sedibeng, West Rand, Vaal, and Johannesburg area and manages the Imperial Wanderers Stadium.

“This is in addition to the stadium’s existing world-class drainage infrastructure where all water, including rainwater, goes into a reservoir to ensure water is saved and re-used. The stadium seldom uses municipal water, if at all, and we always use borehole water for the grounds.”

The solar installation was completed by the SolarSaver Group in partnership with Imperial – the naming rights sponsor to the stadium. The SolarSaver Group was founded with a view to offering clients a unique solar solution that does not require any capital or financial guarantees. The Group runs the largest fleet of self-financed solar installations in Southern Africa.

“The SolarSaver Group portfolio includes over 200 systems operated by SolarSaver under long-term power purchase agreements and rent-to-own contracts across South Africa and Namibia,” said SolarSaver. “The installation at Imperial Wanderers Stadium forms part of the stadium’s aesthetic with the solar panels situated in and around the stadium.”

“The partnership forms part of the stadium’s long-term strategic intent to ‘go green’,” said Central Gauteng Lions CEO Jono Leaf-Wright. “This means helping to protect the environment and sustain its natural resources for current and future generations. As stadium management, it is imperative to utilise more environmentally and ecologically friendly practices to sustain future generations. Everything we can do as society to help our country and planet, we must.”

Leaf-Wright concludes by saying, “It is our collective responsibility as sport and business to find innovative ways to protect our planet, and we are very proud of both the partnership with Imperial and the SolarSaver Group, and being the leading stadium in the country to explore this space.” 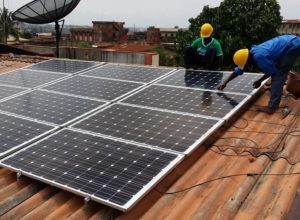 Statkraft to support solar in Africa to address energy poverty