The wind turbines will be transported by road for delivery of generation equipment for Senegal’s Parc Eolien Taiba N’Diaye (PETN) wind farm project.

Once constructed, the wind farm will consist of 46 Vestas wind turbines that can produce 3.45MW each. They will utilise a 117 metre tubular steel tower and have blade length of 61.7 metre, giving a large swept area of 12,469m2.

According to Lekela, these diameters allow the wind turbines to maximise the amount of energy captured from the wind. The project is recorded as the largest such project in West Africa that will supply nearly a sixth of Senegal’s power generation.

President Macky Sall is keen to make Senegal a leader in renewables in Africa, with a 30% target for clean energy in the coming years, of which this project will provide half, reported Reuters. A smaller solar project underway aims to produce 30MW.

“On the environmental level, Senegal has never had a project on this scale,” said Massaer Cisse, Lekela’s Senegal head. “This farm will avoid…300,000 tonnes of carbon emissions.”

The 200 billion CFA franc ($342 million) farm will be roughly half financed by Lekela, and the other half split between US-based Overseas Private Investment Corporation and Danish export credit company EKF.

Renewables currently make up a tiny portion of Africa’s power generation, but several projects aim to increase that share. South Africa, Morocco and Tunisia are all developing industrial-scale wind farms.

On Thursday [23 May], the unassembled parts of the 46 white wind turbines were delivered to the Dakar port, ready to be shipped to the 40-hectare farm.

According to Cisse, as part of the project, young locals will be trained in electrical engineering and computer science to help with Senegal’s chronic unemployment. Read more: Investment platform open for solar plants in West Africa

“This plant is the result of a fruitful partnership between Senelec and Lekela”, said Pape Mademba Bitèye, General Manager of Senelec.

“This partnership was made possible thanks to the support of the State of Senegal and local authorities, which enabled us to remove all the constraints related to this type of project, notably by facilitating the provision of land and the necessary guarantees. We are delighted by this form of multipartite collaboration between Senelec, the developers and the local community and look forward to the commissioning of the first phase towards the end of 2019,” concluded Bitèye. 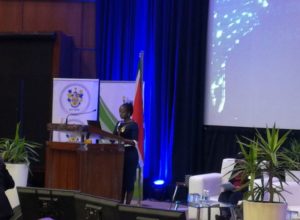