Nominations are now open for the International Hydropower Association’s prestigious Mosonyi Award for Excellence in Hydropower.

The award recognises individuals for their outstanding contributions to the hydropower sector and will be presented at the World Hydropower Congress between 14 and 16 May 2019, in Paris, France.

Named after the renowned hydraulic engineer Emil Mosonyi, IHA’s founding president, the award is for individual contributions related to:

The winner will receive lifetime honorary membership with IHA and free registration to the 2019 Congress.

Richard Taylor, chief executive of IHA, said: “The Mosonyi award recognises those whose commitment to advancing and ensuring the long-term sustainability of the hydropower sector should be an example to us all.

“With senior representatives from the sector, government, financial and academic institutions and civil society attending, the World Hydropower Congress provides an unparalleled stage on which to showcase these individuals and their achievements.”

The deadline for nominations is 10 March 2019. Up to three individuals can receive the award. To be nominated, an individual must be from IHA’s membership.

The 2017 Mosonyi award was presented jointly to Anton-Louis Olivier of Renewable Energy Holdings (REH), Kuang Shangfu of the China Institute of Water Resource and Hydropower Research (IWHR) and Eduard Wojcynski of Manitoba Hydro.

Olivier, CEO of REH, said he was “extremely honoured” to receive the Mosonyi award at the 2017 World Hydropower Congress. “The award represents and an inspiration not only to but to my colleagues and REH’s partner companies, to continue to try to do great things in sustainable hydropower.”

The Mosonyi award is one of three to be presented at the 2019 World Hydropower Congress, along with the IHA Blue Planet Prize and the IHA Young Researcher Award.

The Blue Planet Prize is awarded to projects which clearly demonstrate excellence according to a range of social, environmental, technical and economic criteria. Entries for the 2019 award closed on 31 December 2018.

The Young Researcher Award recognises and rewards emerging talent in academia and the hydropower sector. It invites academic researchers aged under 30 to submit a short article summarising their work which is relevant to at least one topic under discussion at the Congress. The deadline for entry to the Young Researcher Award has been extended to 3 March 2019.

At the 2019 World Hydropower Congress senior executives from more than 70 countries will share knowledge on a range of hydropower and sustainability topics. The event will focus on hydropower’s role in delivering the Paris Agreement and the Sustainable Development Goals.

To learn more about the Mosonyi Award for Excellence in Hydropower or to nominate a candidate, please visit: hydropower.org/mosonyi-award-for-excellence-in-hydropower

Featured image: Eduard Wojcynski of Manitoba Hydro and Anton-Louis Olivier of Renewable Energy Holdings, two of the winners of the Mosonyi award at the 2017 World Hydropower Congress. 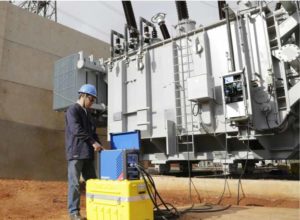