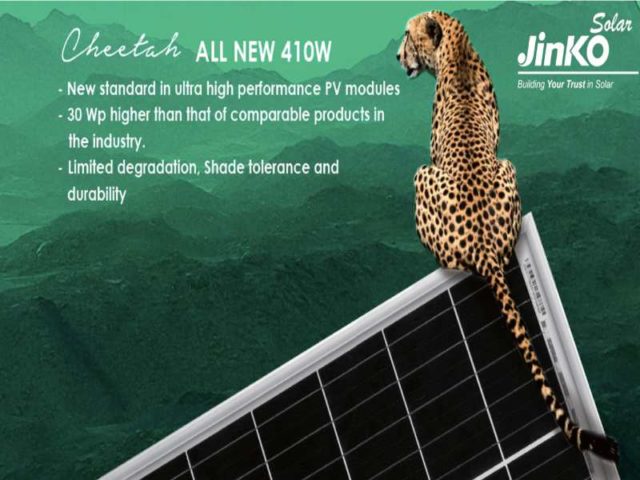 Driven by the rapid industry transformation, continuous technology evolution and the recent increasingly complex market demands of the solar landscape JinkoSolar has utilised its technology leadership to create cutting-edge technologies of tomorrow.

Presented for the first time during SNEC 2018 in Shanghai, JinkoSolar’s Cheetah module is the world’s highest-performing, commercially mass-produced monofacial module, bringing the industry into the new age of PV 4.0 with mainstream module output of 400Wp.

The Cheetah series has created a new benchmark for ultra-high performing modules with its industry-leading performance in metrics such as output, limited degradation, shade tolerance, and durability.

Efficacy of the solution

The trend for Cheetah Series is to become an industry mainstream product in the near future. JinkoSolar’s customers will benefit from this and significantly save on PV system cost with higher energy generation. 72-Cell Cheetah modules combined with JinkoSolar Half-Cut Cell technology will reach 400Wp with conversion efficiency up to 19.88%

Sustainability of the solution

The maximum benefit of JinkoSolar Cheetah Series is achieved while combining it with the HC technology. In this way not only the performance of the PV module is increased, but also its reliability thanks to the lower solar cell current and related lower heat losses.

The combination of Cheetah and HC technologies also has improved the temperature coefficients to -0.37%/°C, consequently boosting the high performance of PV modules even in extreme environmental conditions by almost 2%-3% compared to standard full-cell solutions.

Furthermore, by combining the Cheetah technology with the advantageous Half-Cell module configuration, module power can be increased by additional 7Wp and the entire system can benefit from the higher shading losses mitigation as a positive side effect, resulting in higher yields when the module is partially covered.

The possibility to use modules with higher Wp class can significantly reduce BOS costs and LCOE consequently, fostering the pathway to reach grid parity. Cheetah solution generates significant BOS savings for utility-scale PV projects because the number of modules for given peak power is reduced by 6%. Thus labour costs and mounting structure amounts are also decreased proportionally.

Moreover, comparing an installation with JinkoSolar Mono PERC and JinkoSolar’s new Cheetah Half-Cell PV Modules, the area needed for the PV array is reduced by approximately 3%, fully utilising the economic advantage of a rooftop system and maximising the power output from the roof space. Land occupation and land preparation costs are consequently also reduced.