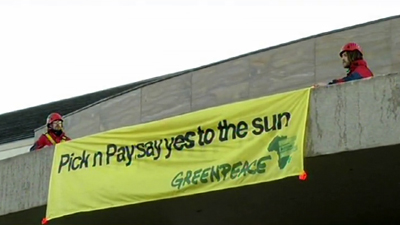 South African retail giant, Pick ‘n Pay, has been accused of not fully adhereing to its own renewable energy mandate, which it implemented three months ago.

Greenpeace South Africa picketed outside the retailer’s head office in Cape Town on Tuesday demanding that they comply with their own clean power programme.

According to the NGO, Pick ‘n Pay ranks 3rd out of the five biggest supermarkets as the worst performing when it comes to committing to renewable energy.

Penny-Jane Cook, Greenpeace SA campaigner, said that large entities such as Pick ‘n Pay, who can afford to remove themselves entirely off the grid, should do so. Cook added that this move would alleviate much of the pressure currently placed on the grid, and free up supply for power deficient areas.

According to research performed by the NGO, the retailer’s energy consumption is the equivalent to 65,000 households’ consumption annually, Cook highlighted.

Committing to the plan

In response, Pick ‘n Pay said that it is committed to the increased use of renewable energy and has reduced energy usage in stores by a third since 2008.

They added that they intend reducing this by an additional 20% by 2020.

“We have reduced our electricity kWh usage by 20% against our baseline – and achieved ZAR130 million in savings during our last financial year,” the retailer said on their website.

The nationwide retailer will continue to engage in talks with Greenpeace SA.