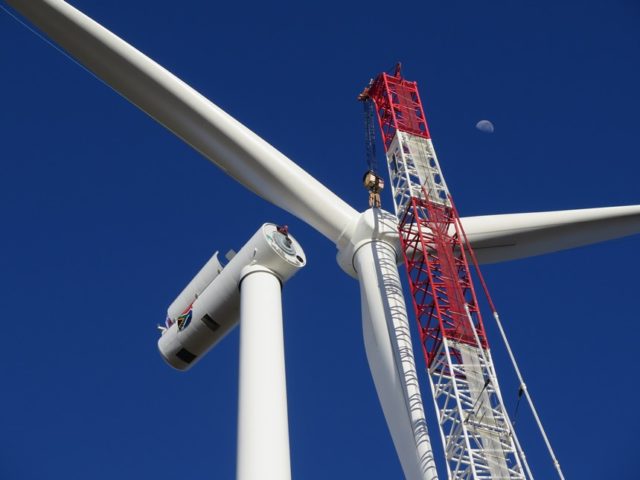 The Khobab Wind Farm, situated in the Northern Province, has completed the lifting of the first of its 61 wind turbine generators, ahead of schedule.

According to a company statement, the first power will be exported in the next three to four months, with all 61 turbines to supply electricity to the national grid by end-2017.

“This is a crucial point in the construction of the wind farm and even more pleasing that we are not just ahead of schedule but also on budget,” said Kevin Foster, Project Manager of Khobab Wind Farm. Read more…

The company explains that the wind turbines, which are 100m tall to allow for optimum energy production, can take up to three days to erect, weather dependent.

The three 53m blades, made from fibreglass reinforced epoxy, are connected to the rotor at ground level before being lifted to the top of the turbine tower.

This is a complicated lifting exercise, in which one crane raises the assembled rotor whilst another smaller crane and taglines guide the rotor into the correct position.

The heaviest component is the nacelle, which contains the generator and gearbox; and weighs 82.5 tonnes.

When operating at full capacity, the Khobab Wind Farm will generate approximately 563,500MWh of clean renewable energy per year; this is expected to supply electricity to power up to 120,000 South African homes.

The firm highlighted that the same team was used that installed the turbines at Noupoort Wind Farm and the Loeriesfontein Wind Farm. Read more…

Foster commented: “Working with an experienced crew, makes all the difference.”

The site was chosen because of its excellent wind resource, its proximity to national roads for wind turbine transportation, the favourable construction conditions, municipality and local stakeholder support, the straightforward electrical connection into Eskom’s Helios substation approximately 7km south of the site, and studies showed that there would be minimal environmental impact. Read more…