The hybrid technology is offered as a turnkey solution or customised package for projects ranging from 10kW to 100MW, confirmed Rick Rathe, general manager of new ventures for Caterpillar’s Electric Power business, at the launch event in Tuscon, Arizona, on Wednesday.

Rathe said the scaleable plug n’ play system, which will be sold through its dealer network, is suited to a range of applications including African rural electrification, industrial facilities, mining installations and telecommunications towers.

The test system installed at Caterpillar’s proving ground for heavy machinery in the Sonoran Desert, is made up of 500kW of photovoltaic (PV) solar power along with 500kW of short-term energy storage and three C15 410-kW diesel generator sets.

The integrated system is expected to reduce fuel consumption by approximately 33%.

Commenting on the timing of the launch, Rathe said: “With the declining cost of renewable energy sources and rapid advances in energy storage technology, the time is right to provide an integrated application for remote power.”

Caterpillar has also invested in US energy storage company Fluidic Energy to utilise its rechargeable metal-air storage. The advantage for rural areas, says Rathe, is the materials have no commercial value and should reduce theft.

The Ilinois-headquartered company said it can also supply ultra capacitors and lithium-ion batteries as part of the integrated system.

The modular system can run with or without gen-sets and on or off-grid, explains Rathe, but depends on connected devices and data analytics to ensure the system delivers the lowest cost of electricity.

Data from each part of the system is communicated to a Caterpillar-developed microgrid master controller unit in real or near-real time and processed by CAT Connect, the multinational’s data processing centre.

Rathe says the system allows the company, its dealers and end-users to monitor the hardware and detect maintenance issues as well as set the percentage of load from renewable sources depending on conditions.

The company said its full end-to-end service also offers support to find funding as well as a mobile revenue collection system offered through Powerhive, a US start-up that is already active in Kenya’s utility sector.

Listen to the interview here: 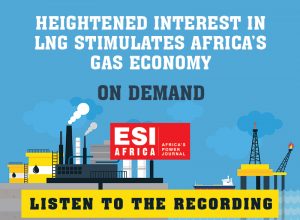