Launching the 2018 African Economic Outlook on Wednesday, the President of the African Development Bank, Akinwumi Adesina, made a compelling case for accelerating Africa’s industrialisation in order to create jobs, reduce poverty and promote inclusive economic growth.

Citing data from the report, Adesina said infrastructure projects were among the most profitable investments any society can make as they “significantly contribute to, propel and sustain a country’s economic growth. Infrastructure, when well-managed, provides the financial resources to do everything else.”

The report also indicates positive progress that many African economies are more resilient and better placed to cope with harsh external conditions than before.

The @AfDB_Group has released its yearly African Economic Outlook. Overall, the recovery of growth has been faster than envisaged, especially among non-resource–intensive economies, reports @akin_adesina https://t.co/DvZDSSCuFc #2018AEO

Noting that economic diversification is key to resolving many of the continent’s difficulties, Adesina urged African governments to encourage a shift towards labour-intensive industries, especially in rural areas where 70% of the continent’s population resides.

“Agriculture must be at the forefront of Africa’s industrialisation,” he said, adding that integrated power and adequate transport infrastructure would facilitate economic integration, support agricultural value chain development and economies of scale which drive industrialisation.

He reminded the audience of policy-makers and members of the diplomatic corps in Côte d’Ivoire that economic diversification via industrialisation with tangible investment in human capital will enable the continent’s rapidly growing youth population to successfully transition to productive technology-based sectors.

Adesina also highlighted the relatively unknown win-win situation that Africa’s industrialisation can generate within the developed world, citing data from the report, which notes that “increasing the share of manufacturing in GDP in Africa (and other Less Developing Countries) could boost investment in the G20 by about $485 billion and household consumption by about $1.4 trillion.” Read more: AfDB to tackle Africa’s climbing youth unemployment rate

The Bank President highlighted various innovative ways in which African countries can generate capital for infrastructure development and what the Bank is doing through its ambitious High 5 development agenda to address the issues raised in the report.

New infrastructure financing gap estimates and innovative ways through which African countries can raise funds for infrastructure development are among the highlights of the 2018 edition of the report. Read the 2018 African Economic Outlook here

The 2018 African Economic Outlook focuses on macroeconomic development and structural changes, and outlines economic prospects for 2018.

The report emphasises the need to develop Africa’s infrastructure, and recommends new strategies and innovative financing instruments for countries to consider, depending on levels of development and specific circumstances. 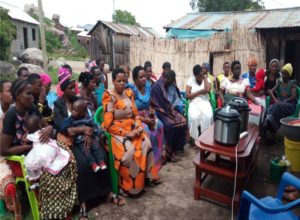