This follows a warning that should the Zimbabwean utility fail to meet its payments – in total arrears of over $50 million – Eskom would cut supply as of 1 August 2017.

The South African state-owned parastatal, which supplies Zimbabwe with 300MW of power, is owed $40 million from Zesa Holdings.

On Tuesday, the Zimbabwean power utility, the ministry of energy and power development and reserve bank officials, met with Eskom management team in South Africa where they presented a feasible payment plan for both parties, The Chronicle reported.

[quote]Zesa officials on Monday met with HCB officials – responsible for 50MW of power – in Harare to discuss the utility’s outstanding debt of $10 million.

Zesa chief executive Engineer Josh Chifamba commented: “We had tense and rigorous discussions. We had tyough negotiations but finally they accepted our payment plan, which they expect us not to default on. Any default means curtailment of power.”

According to the Chronicle, an identified source commented that the debt has to be cleared within the next four months.

Stoppage threat in May

In May, the Reserve Bank of Zimbabwe stepped in to assist Zesa from the stoppage of power supply by South Africa’s Eskom due to an outstanding import bill of $43 million.

Commenting on the development at the time, Eskom spokesperson Khulu Phasiwe, said: “The Zimbabwe central bank wrote to us and is providing a government guarantee for the debt.

“That is enough for us that the State has now stepped in. It’s not an unusual arrangement for the State to provide guarantees and even us at Eskom, we have government guarantees for the debts which we owe. We are not even singling out Zimbabwe for not being able to pay.” Read more…

Phasiwe continued:  “They have publicly acknowledged what they owe to Eskom. We as Eskom are not going to say the amounts owed to us in public except that they are now making arrangements to facilitate payment.” 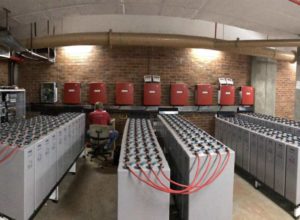