The Integrated Resource Plan, or IRP, has featured a lot in South African news headlines in recent months.  Here we explain what it’s all about.

A plan for the future

The term Integrated Resource Plan refers to the long-term planning of power (electricity) generation from various energy resources, such as coal, in South Africa. The infrastructure, including power plants and transmission lines, required for powering a nation can take a long time to build and can be very expensive, so it’s vitally important that government plans well in advance for the country’s future energy requirements.

However, the rise of renewable energy resources – such as solar and wind power – has prompted widespread calls for changes to the country’s energy mix. To this end, the drafted IRP 2018 seeks to map out a future that fully accommodates the integration of renewable energy into the grid.

The integration of renewable energy into the grid is complicated because these sources are intermittent and do not produce a constant flow of electricity like fossil fuels. This is due to renewables being weather-dependent.

For example, solar will be more effective when the sun is shining and the same goes for wind power, which requires wind to drive the blades and turbines. Note too that when the sun’s irradiance is too harsh it can damage the solar panels and high wind speeds can damage the wind tower’s blades.

The erratic nature of renewables is also disrupting the conventional methods for planning the daily operation of the power grid. Because the power generated from them fluctuates, it’s difficult to consider them for baseload power.

The debate regarding the suitability of renewables, as well as other rising apprehensions regarding the use of coal for power generation, has resulted in the energy industry being somewhat divided. Read more about IRP 2018: 5 things you need to know

South Africa is one of the world’s leading coal producers but its use as a fuel source is unpopular because of its effect on the environment, health issues and climate change. South Africa is a large contributor to greenhouse gas through the use of coal-fired power. This is in contradiction with the 2015 Paris Agreement, which seeks to reduce global carbon emissions.

Nuclear, like coal, provides baseload power and South Africa is the only African country that generates energy from a nuclear power plant, namely Koeberg Nuclear Power Station. The plant accounts for around 5% of the country’s total electricity production. The power plant was built to accommodate expansion; however, this has not as yet transpired due to a debate around affordability, safety, and nuclear waste.

The politics of power

The energy sector in South Africa has generally been led by government, with national power utility Eskom enjoying a monopoly. However, the rolling blackouts that hit the country in 2008 opened up the industry and saw the rise of independent power producers in 2011.

As the renewable energy industry was still growing, having injected 2,145MW of power onto the network and generating R195 billion, Eskom announced in 2016 that it would not sign any power purchase agreements with private power producers. The power utility claimed to have recovered from its insufficient power generation capacity Read more: Eskom to slam door on further IPP projects.

It is important to note that release of the revised IRP has dragged on for a very long time and was overshadowed by controversial plans for an expanded nuclear build, for which former president Jacob Zuma had secured a $86 billion procurement deal with Russia – this was subsequently stalled by a court order.

Although many energy experts maintained that South Africa can’t afford a new nuclear build, Zuma affirmed that the programme would be deployed ‘at a scale and pace that the country can afford’. This saw a frequent reshuffling of energy ministers under Zuma’s leadership.  Read more: Nuclear reaction to cabinet reshuffle – South Africa

But when Zuma handed over the reins to Cyril Ramaphosa, talk around the new nuclear build took a complete turn. Ramaphosa also appointed the now energy minister, Jeff Radebe, and said government simply cannot afford to invest in a new nuclear build. This is highly likely the reason that there is no mention of new nuclear energy in the draft IRP2018.

Considering all of the mentioned issues, the IRP should be seen as the framework that will continuously address the country’s energy sector concerns for grid resiliency and stability.

South African citizens have the power to influence these decisions made in determining the future of the country’s electricity generation.

Public influence lies in giving input in the finalisation of the IRP – a ‘living plan’. The latest IRP that has been tabled outlines the plan– new installed energy capacity to 2030 will include:

Since the release of the document on 27 August 2018, the response has so far been mostly positive from stakeholders. However, there has also been criticism around the inclusion of coal in the energy mix. Read more: Eskom urged to revise its business model to compliment IRP

The table below depicts the current energy output capacity from various sources and the projected capacity. 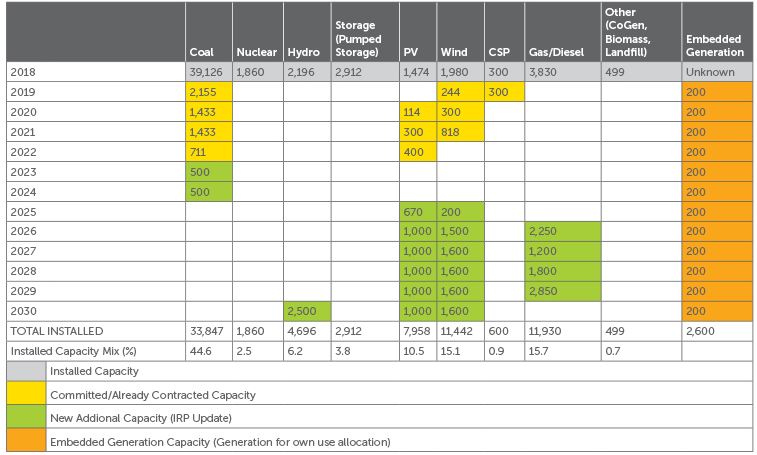 With less than 60 days for interested parties to contribute towards the finalisation of the draft, the completed document promises to be a robust framework for the country’s energy sector with broad participation from the industry players.

Comments towards the IRP may be sent to the below provided addresses.

Director-General of the Department of Energy for the attention of Tshepo Madingoane: 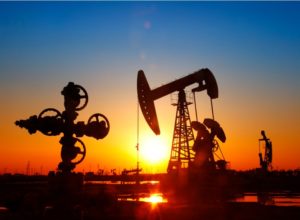